For the first time, there are people wandering around Mint Plaza who are not A) construction workers, B) lost or C) toothless. Yes, Blue Bottle Cafe officially opened this morning, in all its understated glory. The space itself is small, with 12 or so seats lining the windows and a dozen more at the communal table in the middle. Lines are bordering on out the door (though just about 6-8 deep), and there are several media folks hovering in and around. One curiosity: morning/brunch menu stops at 11ish, and the evening menu doesn't kick off until 3:30, which means that lunch-breakers—we're looking at you, Chronicle—only have the option of four to five pastry goods. Just FYI.

Upon ordering, the patron is given a number (note the little number stand in the photo above) and a staff member brings out the order. Unlike the little kiosks we're all used to from Blue Bottle, there are a lot of friendly staff members—upwards of ten —on hand at the cafe today, many of whom should look familiar to regular Blue Bottle patrons. Throw in the crowds that the cafe is expected to draw, there should be plenty of server acrobatics in the little space as they meander to the tables. Also on sale: vino, coffeemakers, bulk coffee, etc. 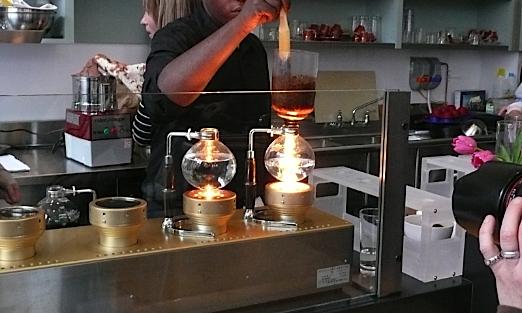 Here we have the siphon bar, the flashy $20,000 coffee machine profiled by the Times earlier today. Seeing it in action is one of the cooler bells and whistles to come around lately. Highly recommended beverage entertainment. And yes, we were deathly afraid to go anywhere near it, lest we break it. 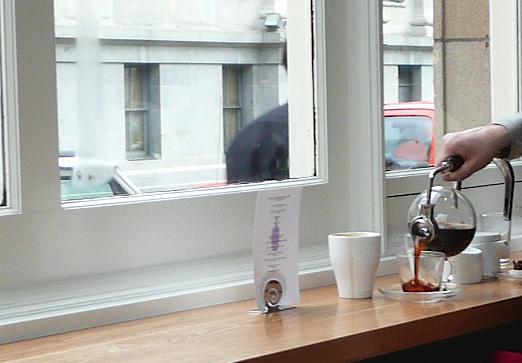 Once the pot you ordered is brewed/siphoned in the magic machine, it's brought to the table, where a nice server pours it for you. (Sidenote: normal coffee, espresso and the like are also available.) 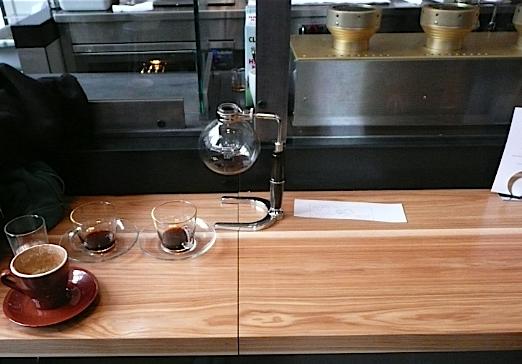 The pot stands on its own too. 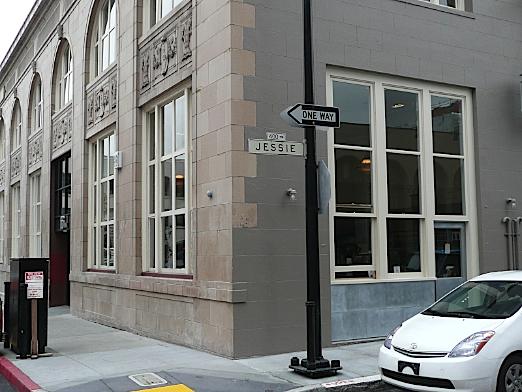 No signage yet, just a very nondescript storefront (as if you expected anything else from Blue Bottle). The main entrance is the little door on the right. For some perspective and general amusement, do compare/contrast Blue Bottle Cafe, San Francisco's new gourmet coffee contestant, with its Los Angeles counterpart, LA MILL Coffee Boutique.
· Mint Plaza Extravaganza: Next Week. Blue Bottle Cafe. [~ESF~]
· At Last, a $20,000 Cup of Coffee [NYT]