Share All sharing options for: Napa Dispatch: Taylor's Delayed, Azzurro on the Move

Because the restaurant scene to the north does indeed go beyond one Thomas Keller (sometimes), we're going to check in up there every once in a while to bring the latest happenings in the ever-evolving Wine Country. Your sightings from both San Francisco and Napa are always welcome at sf@eater.com.

1) The third branch of Bay Area fave Taylor's Automatic Refresher—pictured above in its Oxbow Public Market corner space—has been delayed once again. Its opening was originally set to coincide with the December 15 debut of the marketplace, but has since been pushed back several times. The most recent word: mid-February. The good news is that the signature, giant EAT sign is ready to go. [Eater Inbox]

2) It looks like you can officially add Pilar to the shuttered list, at least for some time. Recently sold to Donna Scala, the answering machine now sounds, "Thank you for calling Pilar. The restaurant is now closed. We are under construction for the next couple of months for seismic retrofitting." As reported earlier, there were rumors that Pilar would take the space next door, which as it stands, is in need of a retrofit. Hmm. [EaterWire] 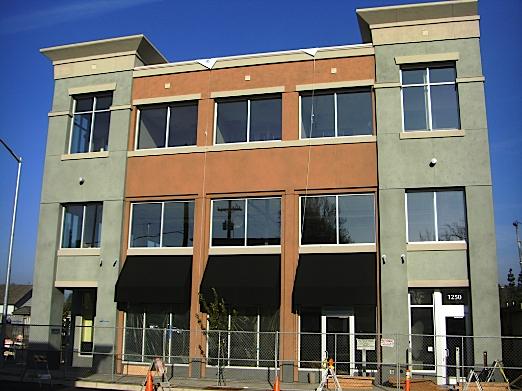 3) Come the week of February 4th, Michael Gyetvan’s Pizza Azzurro will close its current location and move slightly north to 1260 Main Street into a new multi-story mixed space development. Quoth our tipster: "Now moving into their 7th year of business, their larger location with their own personalized mosaic-ed gas-fired wood stone oven will offer a more spacious layout and (rumor has it) desserts and other expanded menu offerings." [Eater Inbox]

4) Over in Yountvillle, Gordon's—recently purchased by Leslie Rudd of Rudd Winery et al.—has once again delayed its opening, this time tentatively to March 2008. [Eater Inbox]

5) Finally, some looking ahead in Kellerville: "PJ Steaks down the street has been purchased (by three partners, including the Traina boys) but there has been no movement." [Eater Inbox]