All restaurant and bar openings, big and small, are served up on a regular basis by The Dish. If you notice a new debut, please do leave a tidbit in the tip jar. 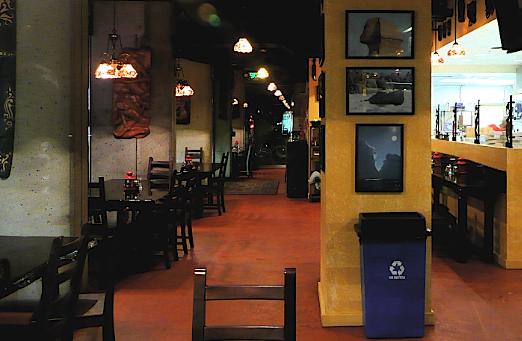 1) Pizza Orgasmica: Finally open as of late December is the Pizza Orgasmica (above) in the Embarcadero Center. which means that Financial District workers can now complain slightly less about lunch options in the area. For now, the new Orgasmica's offerings are more limited than the other two locations, and it is only open from 10am-6pm. In the coming weeks, the menu and hours will expand, and delivery shall commence. 2 Embarcadero Center, at Clay and Front, FiDi; (415) 834-9600; website [Eater Staff]

2) Rubio's: Since we're in the neighborhood, we might as well pass along word that Rubio's has also opened just on down road (by road, we really mean the little fake street found in middle of the Embarcadero Centers). It's the SoCal chain's second San Francisco location; fast food fish tacos for everyone! 4 Embarcadero Center, at Clay and Drumm, FiDi; (415) 986-9001; website [Eater Staff]

3) Pagan Restaurant: Replacing the very curiously-named Sarin in the Outer Richmond is the equally curiously-named Pagan. Sadly, Pagan is not pronounced in the way you/we/everyone had hoped, as it's a Thai-Burmese restaurant. There are two separate menus to choose from (Thai and Burmese, if that wasn't clear), and as an extra special bonus promotion gift, Pagan is offering 10% off all meals in the first month. Open daily for lunch and dinner. Now let's see if polytheism sells better than toxic nerve gas. 3199 Clement Street, at 33rd, Outer Richmond; (415) 751-2598 [Eater Staff]

4) Sweet Dish: Via Chowhound, the Eater Dish appropriately brings word of a new candy shop called Sweet Dish: "This is such a beautiful little store that has every kind of candy and then some. The store itself is 'eye candy' [Ed note: see what she did there?]...This would be a great place to take someone that loves sweets, or to get hard to find candies, unique gifts, or go because there is a child in all of us." 2144 Chestnut Street, between Pierce and Steiner, the Marina; (415) 563-2144 [Chowhound]