True story: one of the new year's resolutions here at Eater HQ is bring more Eater Deathwatch to the huddled masses. Have you noticed a restaurant knocking on death's door? Let it be known that the Deathwatch Committee is now accepting nominations for Deathwatch, 2008 edition. 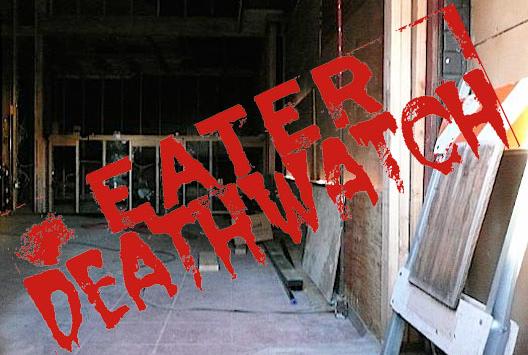 What, you thought a restaurant had to be open before getting placed on Deathwatch? For the case of Pompei, the Committee took the liberty of doling out the famed stamp to Luisa Hanson's next project a bit prior its grand opening. The sad thing is that, were it not for the supreme Barleycorn hubbub earlier this year, Pompei might be deemed too low-profile for the 'Watch. But here we are, so let's get to the paperwork.

Even if the Committee was to look past the obvious karma shortcomings of the Luisa Hanson empire (cf. this), and the Barleycorners' continued assault of Yelp, simple mathematics says that Pompei is doomed from the get-go. By our count, Hanson has attempted to open approximately 30 restaurants in the past 20 years, and two are currently open. Most never got off the ground, and those that did often closed within the year. Throw in the fact that the corner of California and Larkin won't get the foot traffic of Luisa's on Union Street or the easy revenue of a bar (the only hope for Duffy's next door), and you've got yourself the first Deathwatch of the year. So you see, it's just a number game, really. With a tinge of karma.
· Hanson Reveal, Part II: The Front Room's Fate [~ESF~]