Have a tidbit of intel fit for EaterWire? Toss it in the tip jar, please. 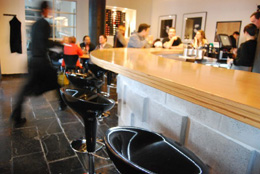 OAKLAND—Lady Hopstress brings the news that after about six months, Mono has already closed. Despite a small-but-loyal clientele, the husband-and-wife operation in the general Jack London Square vicinity just didn't have enough business to get through the economic downturn, and the reviews weren't quite conducive enough to turn the evening tables. [TH]

NEWSSTANDS—Today's the big day: the brilliantly-named Food Network magazine, Food Network Magazine, finally hit shelves today. FNA has a thorough review, with a consensus that even with the inherent star power, it doesn't really give you anything new. Recipes with a big name attached ain't cutting it. [EaterWire]

UNION SQUARE—According to SFist, Paul Frank wants you to vote so badly that today (Tuesday) only, they're giving away free Budweisers at 262 Sutter Street in exchange for voter registration. And MyOpenBar's star keeps on shining. [SFist]

MENDOCINO COUNTY—Wineries just can't catch a break this year: "A record cold snap in Mendocino County over the weekend caused little damage to wine grapes but chilled the hearts of farmers who already have suffered huge losses this year ... Temperatures were milder in Sonoma County, and there were no reports of frost-related problems, county officials said." [PD]