All the day's news and notes go in EaterWire. As always, your tips are very welcome. 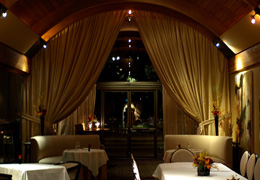 YOUNTVILLE—Auberge du Soleil has lost its sous chef Perry Hoffman, who has signed on as the chef de cuisine at the Domain Chandon's Etoile. Bonus fun fact: his grandparents, Sally and Don Schmitt, were the original owners of the French Laundry. [NVR]

MARIN—Everyone's coping with the economic downturn in different ways, and two Novato restaurants, Finnegan's and Portelli Rossi have taken a novel approach: "To entice families, they've started offering free meals for kids age 12 and under. Kids had been eating free on Sundays, but Hautau says he wanted to expand it for every meal every day to 'offer some relief in these tough economic times.'" [MIJ]

CALIFORNIA—Good news for the anti-bottled water lobbyists: a study shows that bottled water sold in stores has roughly the same amount of pollutants as tap waters (according to an environmental group, but still): "Ten top-selling brands of bottled water contained a total of 38 pollutants including fertilizer, industrial chemicals, bacteria and the residue of drugs such as Tylenol ... the bottled water showed an average of eight pollutants in each sample." Why buy a bottle when you can get your daily dose of fertilizer straight from the faucet? [Bloomberg]