Share All sharing options for: EaterWire: Zinnia Certified Open, Barber in the Wings?

Have a tidbit fit for EaterWire? The tip jar is open for business. 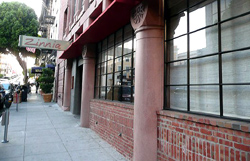 JACKSON SQUARE—Right on schedule, Sean O'Brien has opened the old Scott Howard doors to Zinnia this evening. As today's resyFEED told us, it's fully booked tonight, but we'd guess you'll be able to sneak into the bar should you be so inclined. 500 Jackson Street, between Columbus and Montgomery; (415) 956-7300; website [EaterWire]

SLOW FOOD NATION— Would Dan Barber be the next White House chef or spokesperson for sustainable food?: "...as a spokesperson, yes, I would be ... I think there's a real opportunity to make these issues appeal to this wide swath of the American public ... It's been this elitist issue that's more expensive. It's the Alice Waters. And that's the worst thing that could happen to this movement." (NB: the post on the site now has pulled the sentence with the Waters reference.) [HuffPo via Eater NY]

CLUBLAND—Mayor Gavin's vow to crack down on club-related crime took a step forward at yesterday's Entertainment Commission meeting: "The city commission charged with overseeing San Francisco’s clubs will be granted greater powers to revoke permits and issue citations under an ordinance ... If the legislation approved Tuesday is passed by the Board of Supervisors, the commission would also be granted authority to cite businesses with administrative citations." [SFE]

SAN RAMON—The East Bay has a newcomer: "Connoisseurs of new Vietnamese cuisine are excited about the opening last month of Ao Zai Bistro in San Ramon, in the location vacated by Café Esin, which relocated in Danville. The name refers to a traditional Vietnamese long dress, says Minh Thich, one of the three owners." [CCT]