Have piece of intel fit for EaterWire? Toss it in the tip jar, would you? 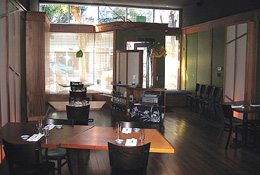 HAYES VALLEY—Onetime Fifth Floor exec Melissa Perello hasn't found a place to call her own yet, so she's going to take advantage of the closed Monday nights at Sebo to put together a $45, four-course menu. There are only two seatings (6, 8:15) available and you can only make a resy online by emailing monday_night@me.com. [EaterWire]

INTERNETS—Via Curbed SF comes a pair of cool new maps for your perusal. First, we have 2itch which plots "all" the city's 24-hour establishments, and let's just say that unless you're in the Van Ness Corridor, Castro or North Mish, you'll find the game impossible. Second on the cartography quest is Gentrify, which maps out all the usual signs of gentrification, like cheese shops, farmers markets, raw food, wine bars, etc. [Curbed]

YOUNTVILLE—November 10th is the annual Wild Game Week at Hurley's. We wouldn't call some of the specials "exotic" or "game" (octopus?) but nonetheless: "From Monday through Saturday, Hurley will prepare a changing all-day menu of wild game dishes created from exotic ingredients stalked from around the world and brought together under one roof. He invites all adventurous diners to come and sample the exciting delicacies that may include Venison Goulash, Roasted Sirloin of Elk, Pancetta Wrapped Quail, Grilled Octopus, Medallions of Ostrich, Antelope Short Ribs, Buffalo Ribeye, Braised Wild Boar, Rabbit Pappardelle, Grilled Barracuda and Roasted Breast of Pheasant." [NVR]