When it comes to the tipline, operators are always standing by. 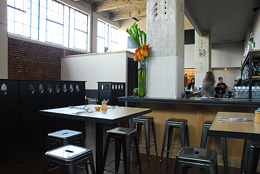 DOGPATCH—Who needs a daily happy hour when you can make a monthly affair? Serpentine is holding a monthly cocktail hour for neighbors and non-neighbors on Thursday, November 13th from 5:00 to 6:30. The 90-minute monthly happy hour will feature "special cocktail~wine list and complimentary snacks." Maybe at least make it two hours? [EaterWire]

UNION SQUARE—Paris Hilton was in town today. While here, she made a point to single out Alioto's as her favorite restaurant in San Francisco. We can't decide if that says more about her or the maligned Fisherman's Wharf restaurant, but it's definitely a lose-lose situation. [SFGate via SFist]

NAPA—Ruben Carreon, owner of Emmy Lou's Diner in the town of Napa, is branching out: "Building on his success at Emmy Lou’s, Carreon is about to launch his next venture — a second restaurant. Later this month, Carreon will open Café Yaribi in the Napa Sonoma Visitors Center on Hwy 29." [NVR]