After all the spoilage over the summer, the fifth season of Top Chef finally got underway last night, with Absinthe's Jamie Lauren being the only chef representing the Bay Area this time around. She's tatted up. She's spunky. She's even spawned a t-shirt line after one episode. But let's get to the mini-recap, and some initial impressions:

1) Quickfire: Pads and Tom welcomed the gang of 17 newbies to New York at Ellis Governor's Island. Right away, the cheftestants had to peel apples (get it??). Our gal Jamie made it through the first QF no problem, but the loser got sent home instantly on the waiting ferry. That loser turned out to be the short-lived, forgettable Lauren.

3) Elimination Challenge: The remaining 16 get put in pairs to cook a certain neighborhood-centric cuisine. Jamie is matched with Greek cuisine and squares off another Team Rainbow member, Richard. As the (very short Jamie and the very burly bearman Richard strolled into the Astoria supermarket together, images of Pinky and the Brain flooded our mind. 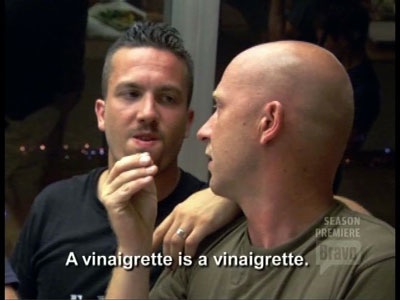 Ah, much thanks, Finland.

5) After last season's weekly chuckles, it's nice to see that the person who writes the poll questions is alive, well and already in midseason form: "Team Rainbow or the Euro Duo?"

6) Speaking of which, the Europeans—the unbelievably stereotypical Fabio and the unbelievably cocky Stefan—are ridiculous, right? And of course they are representing Los Angeles.

7) Runner up for Quote of the Episode: "I learned all about Asian cuisine in school." --the ill-fated Patrick

9) Quote of the Episode: "Your technique of overcooking the lamb didn't work for me." --guest judge Jean-Georges Vongrichten, on Richard's Greek dish lamb burger

10) Eliminated: Not even a three-week course on Asia could save culinary student Patrick.

11) Outlook: We're a bit disappointed that there are no molecular chefs this time around, if for no other reason than the entertainment factor. It looks like Stefan is filling the Hung/Richard role. In the previews, we're looking to forward to seeing Jamie tell off The Finn, and also to this Toby Young fellow. Your thoughts on the first episode below, please.
· All Top Chef Coverage [~ESF~]