All openings, big and small, get served up on a regular basis by The Dish. Know of a new restaurant or bar that we've missed? Pass along your sightings. 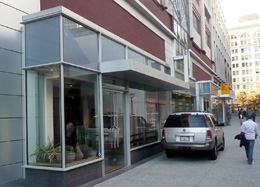 1) Yerba Buena: Now open for lunch is Tropisueno, the latest eatery to hit Yerba Buena Lane. It's a few doors down from Beard Papa's, and right across the way from the Jewish Museum. For now, lunch is the only option for the taqueria-by-day, restaurant-by-night; dinner is slated to start December 1. As mentioned earlier,Antelmo Faria—who has cooked in Sonoma and Monterey—is the exec chef. UrbanDaddy has a few more details, including some thoughts on the decor ("like being on a veranda in Oaxaca"). 75 Yerba Buena, between Market and Mission; (415) 243-0299 Update: Turns out they hit some snags and aren't open yet. A tipster says they are now hoping to be ready by the weekend. [EaterWire]

3) North Beach: King of Thai Noodles has officially replaced the short-lived King Cha Cha in the old Citizen Thai space on the corner of Grant and Vallejo. But that's not all: in lieu of the failed soccer pub idea, the new scheme is to offer karaoke well into the late night hours. 1268 Grant Avenue, at Vallejo; (415) 391-8219; website [EaterWire]

4) Berkeley: Lastly, after a lengthy delay, Beard Papa's is finally open on Telegraph, and should be runaway hit amongst the college kids. 2399 Telegraph Avenue, at Channing; (510) 848-7272; website [EaterWire]