All openings, big and small, get served up on a regular basis by The Dish. Know of a new restaurant or bar that we've missed? Do pass along your sightings. 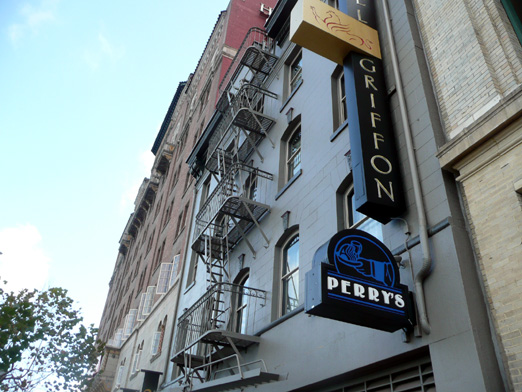 1) Embarcadero: Today is opening day for the relocated second location of Perry's in the Hotel Griffon, technically now dubbed Perry's on the Embarcadero. It's the same Americana, old school food and drink that you've come to know and love at the other locations, and per the location next door to Ozumo, Shanghai 1930 and such, the bar, located in the center of the space, should play a prominent role, both figuratively and literally. Could be the Balboa Cafe of the FiDi. By our math, it's the year's fourth newcomer to this high-profile stretch of the Embarcadero. 155 Steuart Street, between Mission and Howard, (415) 495-6500; website [EaterWire]

2) Financial District: It's possible that Chill picked the worst weekend of the season to open a froyo/dessert cafe, but we suppose not even froyo purveyors can control the weather. One enthusiastic Yelper has a thorough summary of the place, including flavors (original, custard, black sesame) and prices. Also, free Wifi, FYI. 125 Kearny Street, between Post and Sutter; (415) 433-1233; website [EaterWire]

4) Mission/Potrero: Also debuting on Halloween was the Mission Hill Saloon, aka the shuttered Sadie's Flying Elephants. You'll recall it was taken over by the Whiskey Thieves people. Early reports have removals of the pool table and popcorn machine. Eek. 491 Potrero Avenue, between 17th and Mariposa; (415) 551-7988 [EaterWire]

5) Embarcadero: Daily Candy had the details on the opening of the Tcho Beta Store: "The only SF-based chocolate factory, TCHO (which stands for technology and chocolate) combines innovation with a pure and simple recipe for the proprietary bars, now available in a petite outlet adjacent to its waterfront operation." There are four flavors available—"chocolaty, citrus, fruity, and nutty"—and Blue Bottle coffee is there too. But they're not cheap, and the always-frugal Chowhounds are already suspicious. Pier 17, at Green Street; (415) 981-0189 ext. 640; website [DC]