Have a tidbit fir for EaterWire? Kindly pass it along, please. 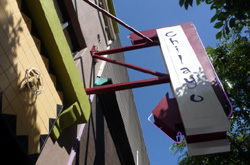 THE MARINA—A few false starts behind it, Chilayo finally opened for lunch and dinner today on Chestnut Street. We already provided a pretty thorough rundown of the newcomer to the old Andale space, but know that the space isn't incredibly different from the prior days. It's a Mexican joint with a farm-to-table philosophy from Jorge Saldana of Tlaloc in the Financial District and Cancun in Berkeley. Open until 10pm. 2150 Chestnut, between Pierce and Steiner; (415) 674-1814 [EaterWire]

NAPA—Big news from the wine front, where that mega deal involving Bordeaux's Cos d'Estournel and Napa's Chateau Montelena has fallen through: "... the French firm was 'unable to meet its obligations' for the sale, the winery said. The Barrett family, which currently owns Montelena, will retain control ... The Barretts, who attracted several potential investors during the past year, do not plan to shop the winery around for another buyer." [Cellarist]

MARIN—Seems like guest chef special dinners are all the rage these days: "It's already been put into use by a few private groups, but now [Slide Ranch's new kitchen] will get its grand public debut with a cooking demonstration and tasting of just-picked-from-the garden goodies with Justine Miner, a chef at RNM Restaurant in San Francisco on Nov. 8." More details here. [MIJ]

TELEVISION——We're not ones to push promotional material for a show, but this 31 second teaser for the Iron Chef "It's Alive" week on FLN contains a pretty entertaining montage of chefs trying to deal with terrified live creatures. A highlight: battering (for the deep fryer) live octopus. [Pickle via Eater NY]