Share All sharing options for: One Year In: South Food + Wine Bar

This is One Year In, a feature in which Eater sits down for a chat with restaurateurs and/or chefs celebrating their one year anniversary. 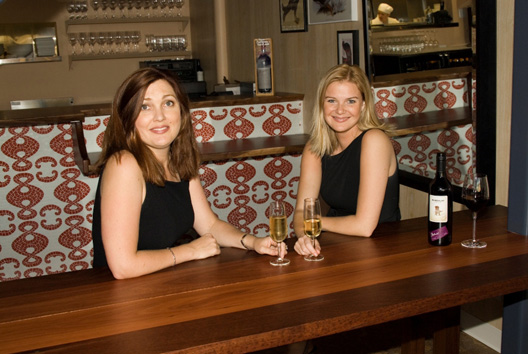 A little over a year old now is South Food + Wine Bar, the city's first and only Aussie/Kiwi restaurant. Tucked away on Townsend, the cozy 50-seater is the unassuming first American venture by international celebrity chef Luke Mangan, and running the show is the experienced duo of Anna Weinberg and Liz O’Connell. Now that the critics have been through, how's it been? Was it everything they expected? And what's next for South? We turn it over to Weinberg (on the right, above).

So, one year in. How’s it been? You know, we were really lucky when we first opened. It was sort of everything we hoped for. We were excited about the concept and it’s like having a baby where you just gloss over the bad stuff, and you still have that kind of optimism. So we were lucky in that we were really busy to start. Yeah, you got a lot of good early buzz. You know, we were really lucky that we did. Liz and I have PR and marketing backgrounds so we definitely used those. And it’s a small space as well, and we always felt that was the way to introduce this concept—because we did worry that maybe no one will give a shit about a Kiwi/Aussie restaurant—so we sort of saw this as like a pilot. We planned to expand out and always wanted to do it first in San Francisco because it’s a great place to cut your teeth in terms of credibility in a major food market. But the idea that we were 50 seats felt manageable, and because there are no other Australian restaurants.

What were your concerns coming in? Well, Luke is very hands-on in terms of getting with the chefs and putting the menus together. However, he can’t be in six continents at once, so were really concerned about that whole backlash and that was another reason we were going to do it small. How'd you counter that? We got one of the chefs over from New Zealand who had worked with him for years and it all just felt really manageable. And we opened, and it was really busy and great and all that, but I think everyone will say the same thing: everything costs twice as much as you thought it would. Everything!

Any early surprises or disasters? Everything broke. You’re sitting here with me and we’re looking at those huge vents and do you think those vents worked -you would assume we had air conditioning? Interesting, right? We didn’t. So due diligence is a word that I probably needed to know a bit more about [laughing], but again, I think it’s like childbirth: you’d never do it again if you remembered it. I think I went through the exact same process when I had my restaurant in New York but I must have forgotten. Lots of problem solving then? Yeah, things like realizing that, oh my god, there’s no place for the garbage company to pick up garbage, which was quite a big problem and how are we going to wheel it around those 16 blocks to get around the back every night. But you make it work, you figure it out and then you realize that it’s not so bad.

But you made it and opened. What were the crowds like at first? The first six months we were open, we definitely got adopted by the local Aussie-Kiwi community as somewhat of a home base, as where they would bring their business associates for lunches. It feels like a community, and they could share where they are from, so that was really lovely.

You’re pretty much next door to the ballpark. How does baseball season affect the restaurant? Oh that was going to be my next comment. We thought that was just going to be the greatest thing ever. We really did. And then what we realized was that people come in before the game, and they have a beer, which is great. But they’re not really into Australian boutique wine at all, oddly enough. Shocking right? And then, no one can park. There’s just no parking at all on game days ? you know, I would get like four tables a night—and we only have eleven total—circle and call me just pissed off that they couldn’t park and they cancel. So when you’ve only got a certain amount of seats, it’s gutting. We have solved the problem for next year by sharing valet with another local restaurant.

Then the critics came in. How did you deal with those? We’ve had, I think, good solid reviews and a lot of press. Getting the cover of Food & Wine magazine was awesome. When you work for someone else, you don’t realize how personally you take reviews. I mean, we had a couple of kinda shitty ones, things like Yelp. I’ve stopped obsessing about it. I never thought I would, but I take them so personally. I mean I really do. You just can’t stand the idea that you put so much work and love into something and someone would come in and have a bad experience. Luckily for the most part all the feedback has been great- otherwise I would be a basket case. My partner Luke is much better about it – having been reviewed so many times, he is very “you win some, you lose some” just keep being proud of the product you are putting out. It’s good advice.

And then you announced the LA expansion. Well, we’ve talked about it since the very beginning. Luke’s got a lot of clients in LA, a lot of high profile Australians in the film industry and he’s always done a lot of work there. We really kicked around the idea of doing Los Angeles first because there’s a much more natural analogue between Sydney and Los Angeles in terms of the weather, the lifestyle. But again, we thought from a credibility standpoint—and also because we live here—San Francisco was the right route, but we always wanted to do a larger, flashier project in LA. We wouldn’t have necessarily done it so quickly except it was fantastic opportunity when the space came up.

What’s the latest from LA? Any lessons you’ll take from opening SF? The chef is someone named Kathy Tindall and she’s been Luke’s executive chef at Glass since they opened so we’ve already got her visa approved which is a big relief because she is a fabulous chef. Oh yeah, and I know more about visas than I ever thought I could. And HVAC! I never thought I’d know about that stuff. It’s not very glamorous.

One year in, would you say your expectations have been met? Well, the last couple of months have been crap, for us and for everyone. But yeah, for sure. There’s always something. I wouldn’t say I have any regrets or that all my expectations have been met! ... Big restaurants can become this operational monster. You’re always chasing down someone or something that didn’t show up on time. When I was a manager, I just spent my life chasing busboys and waiters who didn’t show up to work. Here, working it myself with a great small team makes me happy.

Where do you want to be at this time next year? Well, probably sitting right here where I am now in my restaurant. I’d like to have Los Angeles open. I’ll put out there that I’d love to find an amazing operations director in L.A. I’m really excited about our online store and our food + wine clubs so I think I will be pretty focused on growing those this year. So it’s really just keep moving forward and hope the economy sees some recovery in 09.