Adventures in Shilling: This Post is a Jubili Knockoff

Adventures in Shilling is a celebration of the latest and greatest shills from around the world wide web. As always, you too can help fight shills. 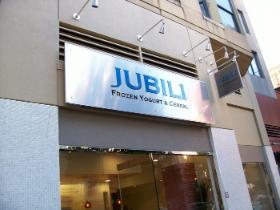 Given the entire nature of the frozen yogurt wars, it's fairly natural that fro-yo shops should resort to the dirty, dirty practice of shilling. We imagine that once a shop is actually cleared to open, it's difficult to differentiate one fro-yo place from the other, especially given that, well, they all seem to have the same logo. With at least four new frozen yogurt shops slated to open in February, the Fillmore's Jubili—just opened in the fall, mind you—wants us all to know who's really the originator, which is quite ironic, seeing as how Jubili can probably be filed under Pinkberry/Red Mango knockoff itself.

Exhibit A comes via the shill cesspool called Yelp; here's a one-star entry, dated 1/29 for the unopened Tuttimelon (apologies for the caps):

"Four Stars OFF automatically! for DECOR!!

Quickly owned JUBILI KNOCK OFF!?!?
They attempted same walls, same tiles (you have to give them a little credit for using a slightly different shade of color), same counter,
BUT probably a SECRET MIX FROM CHINA?!?"
Shill Probability: 40%

But the assaults on Tuttimelon didn't stop on Yelp. A Chowhound post wondering about the new yogurt shop elicited the following pair of responses:

"JUBILI knock off. Same interior ideas. Owned by Quickly. Quickly gets its ingredients from China... will they get their Italian frozen yogurt from there as well?"
Shill Probability: 80%

After the post was rightly deleted, "someone else" decided to respond to the original poster:

January 29th was a busy day apparently, as an anonymous fellow left a lengthy comment here on Eater SF:

"I walked by tuttimelon recently and noticed that they have a sign for a Quickly valentine's cruise. You are correct that this place is probably asia's Quickly coffee attempt to save the dying trend of tapioca drinks. As a student I know that they are suffering in UC Berkeley as many Cal students are now opting for froyo.

However, can't Tuttimelon be a little more original? They completely knocked off Jubili's design.

Next thing you'll see replacing the Stinking Rose will be the Smelly Rose (asian style). We don't need anymore Prado purses in this world thank you.

I know that Jubili sells Italian frozen yogurt imported from Italy. Knowing this, I think Quickly's Tuttimelon blend will most likely a blend from China. Who knows what will be in the powdered mix."
Shill Probability: 95%

And to top it off, another anonymous commenter gave up on the Tuttimelon bashing and in a brilliant show of non sequitur, just flat out told us all to go to Jubili:

"The politics will never change in SF.

Go to Jubili for your tart froyo fix."
Shill Probability: 99.9%