Share All sharing options for: EaterWire AM Edition: Changes in Fusion World

THE MISSION—The evolution continues at 2886 16th Street. You'll recall the timeline: Popul Vuh receives glowing 2.5-star review from the Chronicle, owners sells, chef leaves, concept tweaked slightly to "Mayan Fusion" and name changed to Chichen Itza in late October. Now, all Chichen Itza signage has gotten the Wite-Out treatment (as seen above), and the name has been modified once again to Poc-Chuc. According to a posted letter, the reason for the change is copyright infringement on the Chichen Itza name. [EaterWire]

GLEN PARK—Elsewhere in San Francisco's relatively small circle of fusion restaurants, Ric Lopez's Sangha is slowly moving past its soft opening phases. The Japanese-Latin menu has been expanded, and lunch service is now being offered from 11am to 2pm. Also on tap in the very near future is the arrival of a bevy of local artwork to spruce up the currently-ascetic Chenery Street space (we're talking sculptures and everything). For the time being, a snippet of the menu follows the hop. [EaterWire] 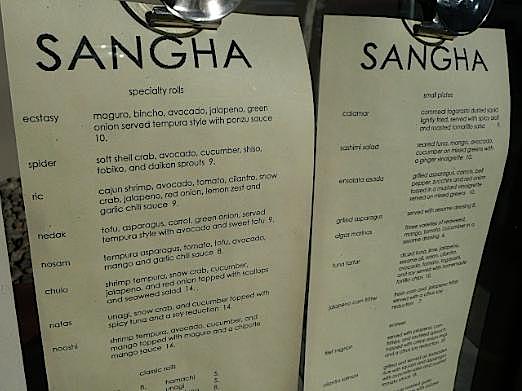 Got some juice? You better believe that tip line operators are standing by.