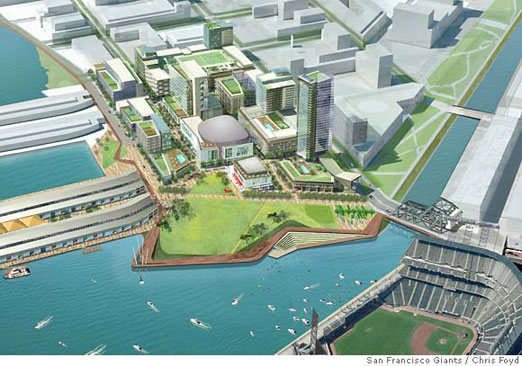 1) The fate of Seawall Lot 337 is nearing, with the Giants' proposal for the empty lot behind the ballpark revealed in a blaze of orange and black glory: "875 homes in a 300-foot high rise, 8,000 square feet of office and parking space, a 5,000-seat music hall, and an entertainment district featuring bowling."
2) The sidewalks of the Haight got a dose of Obamarama. Hilarity ensues.
3) Mayor PlumpJack took a ride on a bus to see the state of affairs in Sunnydale. Hilarity doesn't really ensue.
4) Starting in August, the entire Bay Area will be doused with pesticides for five years. Organic locavore people, your thoughts?