All the day's news goes in EaterWire. Per normal, your juicy gossip to sf@eater.com. 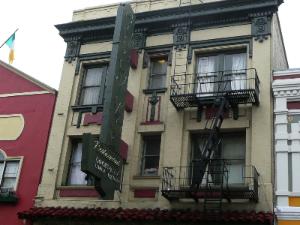 TENDERNOB—The long-vacant restaurant space at 1237 Polk might have a new tenant in the wings. If it passes the planning commission gauntlet later this week, the former Johnny Wok space will become McTeague's, a bar "that will serve limited food items including sandwiches and soup." While we give McTeague's bonus points for naming a bar after the turn of the century Frank Norris novel set in San Francisco, we have to wonder if it's possible for a new bar to go directly to "dive" status. Anyone? [EaterWire]

NAPA—And yet another Ferry Building tenant is planning on making the trek up to Napa's Oxbow Market: "Hog Island Oyster Co. will open an oyster bar in Napa's new Oxbow Public Market. Similar in size and menu to the company's operation in San Francisco's Ferry Building, the new venture is projected to debut in September." [Inside Scoop, last item]

FISHERMAN'S WHARF—Tim McDonnell, the owner of Tarantino's on Fisherman's Wharf and Sausalito's Spinnaker, has decided to take on a new project all the way up in the vast reaches of Sacramento, where he will remodel Folsom's Cliff House, a restaurant that reportedly has a stunning view of, um, the American River. Given McDonnell's expansions northward, here's hoping that Tarantino's quality doesn't slip like the rest of the Fisherman's Wharf restaurants ... Wait, what? [Folsom]