All the latest and greatest restaurant openings are served up regularly via The Dish. See a new restaurant in your neighborhood? The tip jar awaits. 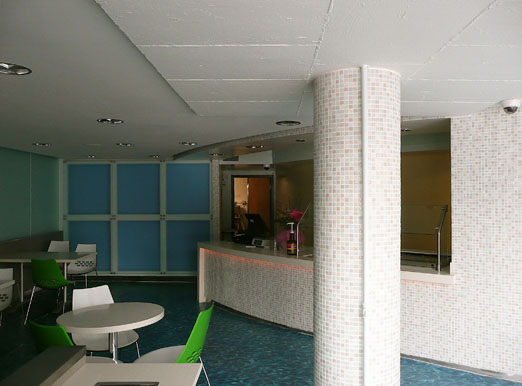 1) SoMa: Right behind the Westfield mall and next door to sister eatery/pot pie purveyor The Cravery, Icebee opened its doors this past weekend. The plywood vet is trying to differentiate itself from the frozen yogurt masses by taking the self-serve and pay by weight approach. Five do-it-yourself dispensers with multiple flavors are to the right of the pictured counter, and once toppings are added, the patron pays the logical fee of 39 cents per ounce. Afterwards, feel free to swing next door and wash it down with a Chipotle Chicken Fajita handheld pot pie. 829 Mission Street, between Fourth and Fifth, Phone N/A [Eater Staff]

2) Berkeley: You didn't think the East Bay was immune to the froyo festivities, did you? From Chowhound: "Yet another of the Pinkberry-inspired tart frozen yogurt places; this one is in downtown Berkeley, on Shattuck near Kittredge, directly across from the Berkeley Public Library. Yogurt Harmony (no relation, apparently, to Harmony Yogurt in San Carlos) offers four flavors, plain, green tea, peach, and pomegranate; the usual fruit, candy, nut, and cookie toppings, and red bean and mochi. They also have shaved ice with Torani syrup and a special of shaved ice, yogurt, toppings, red bean, and condensed milk, and coffee and tea. A pretty space, in the usual citrusy colors of the Pinkberry wannabes. A medium pomegranate with raspberries set me back $5.66 with tax. I liked the yogurt better than some of the others I've had in this genre; it was lighter and had less aftertaste. They opened on Wednesday night." 2259 Shattuck Avenue, Berkeley; (510) 848-5903; website [Chowhound]