Coming to you live from the main stage of the Sobe Fest, we're here bringing you a live blog of the 2008 Golden Clog Awards, much to the chagrin of the festival honchos. You'll recall, this little award show is the brainchild of Tony Bourdain and Michael Ruhlman's darkest, drunkest nights. The full list of nominees was announced earlier in the week. Bourdain and Ruhlman just took the stage about 30 minutes late, much to the female groupies' delights (the wine flows early down here). Bonus tease: rumor has it one Rocco DiSpirito will be on hand to give out his own award.

2:35: Up first: THE FERGUS, for greatest achievement in pork, and/or guts. It's between Martin Picard of Montreal's "Au Pied de Cochon"; David Chang of New York's "Momofuku Noodle Bar and Momofuku Ssam and ..."; Chris Cosentino of San Francisco's "Incanto" And your winner is ... David Chang! Accepting the Golden Clog is ... Aaron Sanchez?

2:37: THE CHEF'S CHEF AWARD Also known as The What's a Publicist? Award for the chef who continues to make the kind of food other chefs like, while flying largely under the national radar Chicago's Paul Kahan for Blackbird and Avec in Chicago wins, but in his stead, the drunk, screamy women in the front row, who decided they were from Chicago.

2:45: THE ALTON For being on Food Network and yet, somehow managing to Not Suck Duff Goldman, Ina Garten and Giada diLaurentis are up for the clog. Aaaand we have our first extended Bourdain monologue, in which he describes Giada's cooking as "the thing about her is that, I'd actually eat some of that stuff she cooks. Oh, but it's an upset: Ina Garten wins, even though "all her friends might be florists."

2:49: Robert Irvine rides the momentum and takes THE CAT CORA AWARD, for most fame based on least actual culinary achievement. Upon announcement, Bourdain and Ruhlman look around, hoping to God that Irvine is not in attendance, but we heard that the muscle man got banned from the festivities, which bodes well for these guys, because they are in no state for physical confrontations. THE SWOLLEN LIVER AWARD, for the chef/or food person who has most consistently resisted the cruel attentions of PETA and the Food Police, goes to Ariane Daguin, upsetting Cosentino AND Laurent Manrique. Sorry SF.

2:55 Drew Nieporent presents the above SWOLLEN LIVER AWARD, and leaves the stage with this quote: "Remember if you need a resy at Nobu, don't call me." Also, the drunk women in the first row are now from Cleveland and have developed a crush on Ruhlman.

2:58: The stage for this little misadventure, The Bourdain and The Ruhlman: 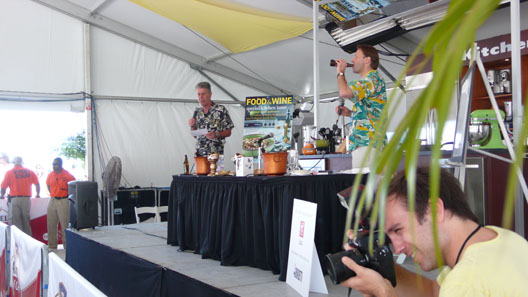 3:00: We've got our first legitimate awkward moment that sees Bourdain and Ruhlman actually looking guilty, like the kids that got caught doing something bad as they hand out the THE MARIO, for the chef/restaurateur who best multi-tasked, multi-platformed, merchandised, whored himself, or opened multi-units (either while impaired--or not) and yet STILL managed to protect the quality of the mothership--while continuing to make valuable contributions to the restaurant landscape to Father Thomas Keller. Wow. Just, wow.

3:01: Pretty much immediately after announcing Keller's Golden Clog, the nervously-smiling and suddenly-subdued pair of Bourdain and Ruhlman backpedal for a solid 90 seconds, praising Per Se and the French Laundry and the Church of Latter Day Keller.

3:06: Presenting THE ROCCO for worst career move is Rocco! And your winner is ... Tyler Florence for Applebees, Applebees, Applebees. Bourdain on the victor: "You can get really fucked up at Applebees for cheap. You can't do that shit at dunkin donuts!"

3:30: Post-show, Bourdain and Ruhlman sign autographs (and maybe some chests), but somehow Rocco has become the main sideshow attraction (??). Since we missed some of the winners, here are the rest of the honorees from THE first annual Golden Clogs:

THE STEINGRARTEN: for the writer or blogger who actually GETS it The Nominees: Bill Buford for Heat, Pim for Chez Pim and Mike Nagrant for Hungrymag.com. The winner, eliciting an impressed "wow" from the Mothership, is Mike Nagrant.

THE DOUCHEBAG for the best example of twisted, repressed, or compromised "I'd rather be making lemon bundt cake with My Cat, Mr. Mufflesworth" journalist who actually HATES food and hates the people who make food even more Congratulations, Alan Richman.

THE CRAZY BASTARD SPECIAL ACHIEVEMENT AWARD for the chef/operator who did the most insanely wonderful or heroic fucking thing in recent memory One nominee, one winner: Chef Donald Link of Cochon in New Orleans.

LOOKING FOR LOVE IN ALL THE WRONG PLACES AWARD Nominees: MJ Adams at the Corn Exchange in Rapid City SD; Andrew Meek at Sage in Windsor Heights, Iowa; Jim Kyndberg at the Bayport Cookery, Bayport MN; Stuart Tracey of the Pirogue Grill in Bismark, North Dakota. Huh? Did someone say North Dakota?

Bourdain leaves the stage with the promise that they'll do the same show tomorrow, but "with 20% more dick jokes!" Hopefully, Tyler Florence will get the memo and make an appearance at tomorrow's redux. And here's hoping Bourdain and Ruhlman can survive the Food Network brass (and Robert Irvine, for that matter) and survive the night.

Right now, proving that some acts are just impossible to follow, there's a cooking demonstration onstage—something about lobster stock—and the poor demo chef is just dying up there: "So ... any questions? ... everyone enjoying their beers?" Crickets.

Anyway, a big round of applause for Bourdain and Ruhlman. And Rocco, we suppose. In every way, the highlight of the festival thus far.