This is Hangover Observations, where we share our thoughts on last night, the night that was. 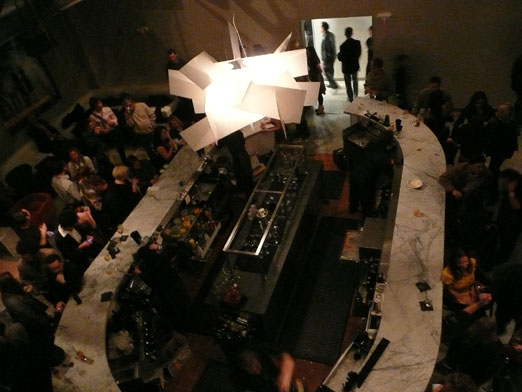 1) Upon witnessing Elizabeth Falkner climb up on the bar for an impromptu swordfight to ring in her new restaurant, we couldn't help but wonder how much better the Epic/Waterbar opening could have been had Pat Kuleto done the same thing.

3) Though its airiness makes for a noisy scene, Orson's two-story space is nothing short of impressive. The centerpiece marble bar, in particular, garnered rave reviews throughout the night.

4) Smartest people in the room: those who camped out by the kitchen and scooped up all the hors d'oeuvres. Serious hors d'oeuvre circulation issues were at play.

5) Early upshot: Orson will give SF something it hasn't seen: a trendy, flashy, upscale late-night place with experimental cuisine that attracts old and young, straight and gay, foodies and locals. And only someone as established/talented as Falkner could even try to get away with it.
· Orson [Official Site]

Complete Orson coverage can be had here.