MINT PLAZA—Down in the city's finest pedestrian promenade, the Chez Papa team has confirmed that they are indeed aiming for a debut sometime during the week of the 17th, the proper permits, ahem, permitting. They've got the beloved inspections circuit waiting at the ready and it looks like they are also in the process of staffing up. Also, they found some white paint. [EaterWire]

CENTRAL COAST—In the nonstop search for the next place to anoint as the new black, the Chronicle has decided that Paso Robles, a sleepy town in San Luis Obispo County, fits the bill. In fact, it is so great that it's the new Healdsburg, which you'll remember, is the new Yountville: "If I had a dollar for every time I've heard that Paso Robles is 'the next Healdsburg,' I'd have enough money to buy a $3 million Victorian within spittin' distance of Healdsburg's upscale shops, restaurants and winery tasting rooms ... arguably the town's finest restaurant, Artisan ... could have been lifted off the main drag in Yountville and dropped onto Park Street." [Chron]

NORTH BEACH—It's been known for last several weeks that the legendary Michael McCourt—bartender for the last 20 years at the recently-shuttered Washbag and for the 20 years before that, at Perry's—has been doing weekday shifts at Amante. Regardless, we just had to share the Michael McCourt flyer (pictured, below) that found its way into the Eater SF Flickr Pool earlier today. Enjoy. 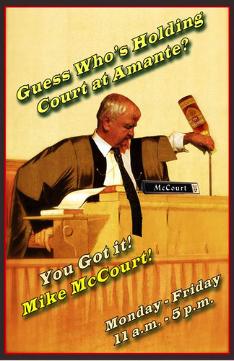