All news fit to run goes in EaterWire. Have a tip? You know what to do. 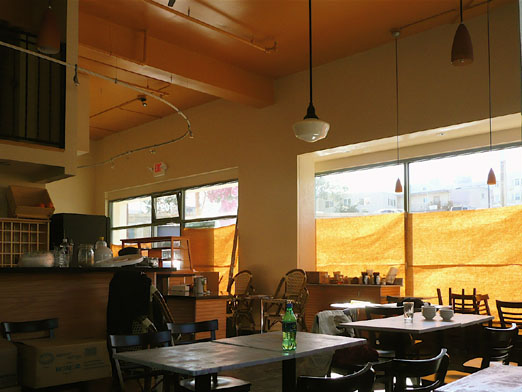 NORTH VALENCIA—Briefly mentioned by Lady Hopstress in last week's newsletter, Jackie's Vinoteca and Cafe is now hoping to open this upcoming weekend. On the corner of Valencia and McCoppin, it will be a fairly-standard cafe—soups, salads, sandwiches, to-go options, etc. plus vino—though the space (above) is a good-sized one, which means that it will either be a good congregating place or an empty place. [EaterWire]

FINANCIAL DISTRICT—We told you the Kearny stretch of the FiDi was a neighborhood in flux, with lots of newbies moving in for the office workers' enjoyment. Also (say it with us): meat pies will not catch on. The most recent evidence comes with the shuttering of Kearny Street Pies; from the Eater Inbox: "there is i guess a new sushi joint coming in where the meat pie place was on kearny ... the meat pie joint? er...not surprised it went out ... maybe those were very good knock offs of the original english meat pie so no wonder they didn't last, too many other good places for lunch around those parts w/o resorting to a meat pie." Sidenote: we're also hearing rumblings of bento boxes. [Eater Inbox]

BAY AREA—Things are not looking good at all for the salmon season; the latest from the calamity is that a statewide ban might be imminent: "A key federal advisory panel this week is expected to begin considering an unprecedented ban on salmon fishing in California in response to an alarming collapse of a signature fishery ... the cause of the salmon collapse remains a mystery and that researchers have 46 potential factors to investigate." [SJMN]