Last night's premiere of the fourth season of Top Chef didn't stray too far from the proven formula of past seasons: plenty of product placement (anyone know where to find some GLAD items?), requisite lusty shots of Padma and a fair amount of kitchen sweat, but the first episode was packed with lots of new characters, memorable quotes and some very wildly-entertaining moments, many of which involved the (already!) front-and-center San Francisco foursome of Ryan (Myth Cafe), Jennifer (Coco500), Erik (Circa) and Zoi. Since we've got 75 minutes worth of chefgasms to recap, let's cut right to the chase:

1) First "bombshell" of the show: Jennifer and Zoi awkwardly announce that they are a couple. And the show goes on. Immediately, we think maybe Bravo should get some props for not belaboring a plot twist that could be construed as hokey and gimmicky.

2) Team San Francisco's style deserves note: Jennifer has the exact same fauxhawk hairstyle as early favorite Richard Blais (who, let's not forget, already has Iron Chef America on his resume). Erik features some serious, serious bling, from the rings to the chains to the earrings, and Ryan rocks the popped collar.

3) A deadpan Zoi, trying her very best to pretend to fawn over Rocco DiSpirito: "I was ... surprised ... him ... standing there in person." No really, she was thrilled to see him.

4) All four locals do relatively well in the Quickfire Challenge—make Chicago deep dish pizza—while most of the other competitors struggle (early villain candidate Dale put it best: "All these pizzas are fucked up!"). The pedigrees of both Ryan/Myth Cafe and Jen/Coco500 are especially evident, with Ryan making an escarole-ricotta pizza that pleases Padma, and Jennifer whipping up a seasonal "harvest" pizza.

5) And then, the Fab Four royally flops in the Elimination Challenge, which sees the chefs composing classic dishes. Erik and Zoi pull subpar souffles out of ... somewhere. Ryan's "chicken piccata" gets slammed by the judges. Only Jen's autumn vegetable lasagna fares well, but even that dish loses to the chick who made pasta from scratch. Show-off.

6) The best exchange of the episode took place in the waiting room, between two nervous chefs on the chopping block:
Erik (muttering, head down): "... My nachos didn't cut it."
Ryan (also muttering): " ... I breaded chicken."

7) Did anyone else think Rocco came out with the guns blazing? The man quizzed Erik like there was no tomorrow, and then delivered the rib-tickling zing! of the night when discussing Ryan's failed chicken piccata: "Let's just say it wasn't just his gnocchi that was dense." Good thing Rocco's pretty.

8) Remember Item #1, where Bravo garnered praise for not turning the "Chefbians Plot Twist" into a gimmick? Yeah, nevermind: 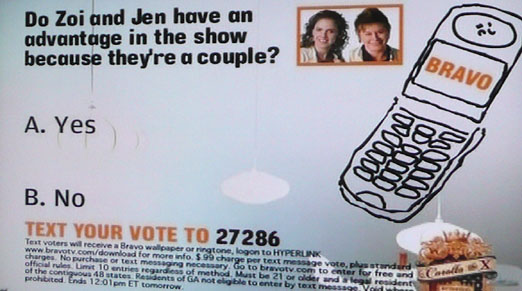 9) In the end, Ryan and Erik survive the judges' wrath and the fragile Nimma from Atlanta gets sent home.