Curbed Rumblings: Lots of BLU, No Green, Some Jobbers

Share All sharing options for: Curbed Rumblings: Lots of BLU, No Green, Some Jobbers 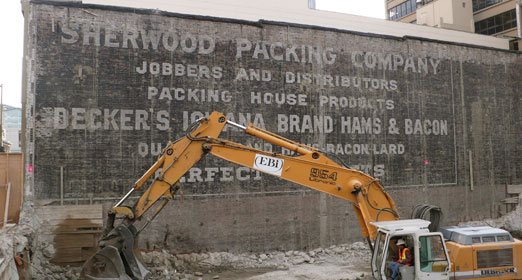 1) 'Twas a big week on Folsom, where things have never looked BL?er for mega-project BL?: sex-y new renderings were released and the actual building is ready to top off any day now. Now about that name...
2) City Hall launched Trees For Tomorrow in '05; three years later, people who live in the Sunset decided they would rather not enjoy Mayor PlumpJack's free trees.
3) Still the coolest ancient sign we've seen in a while.
4) On the corner of Washington and the Embarcadero site of the Golden Gate Tennis & Swim Club is about to be developed and Curbed has the renderings to prove it.