Welcome to First Word, wherein Eater and its correspondents sit for hours at steamy community board meetings to bring back the first word of the restaurant drama that went down there. Your reports from the field always encouraged to sf@eater.com. 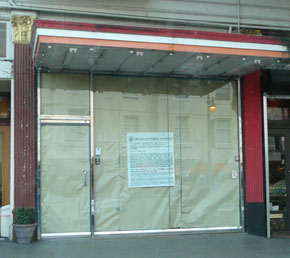 As much as Planning Commission meetings can be considered as such, yesterday's affair was a doozy, at least on the restaurant and bar fronts. All in all, it capped off a restaurant-centric week in the political arena, with the Board of Supes passing the menu-labeling legislation on Tuesday. Here's what went down yesterday with the commissioners:

1. Proving once again that opening anything in North Beach is no easy task, prospective wine bar Vino Divino's request for a Conditional Use permit was denied based on several factors. The planners' cited reasons for disapproval: first, North Beach's concentration of eating and drinking establishments is already too high (it's in the 45% range and the normal range is around 20%). Second, the space in question—507 Columbus—is zoned retail and the neighborhood association(s) want to preserve the retail in the nabe. Finally, the change of use would entail a new liquor license, and as we know, North Beach wants to cut back on the drinking establishments (Kerouac would not approve). Thus, a wine bar shan't moving into 507 Columbus Avenue.

2. The biggest news of the meeting, or at least the item with the most palpable effects, might be Om Lounge, which was approved with conditions (much more on Om here). For all intents and purposes, plans for the upscale restaurant/lounge behind the Gaylord Hotel near the corner of Geary and Jones moved forward, and the next step is working with the city. Some of the conditions: the outdoor area (which may involve fire pits, water installations and foliage) is to close by midnight, no amplified music is to be played (though individual cabanas might have music piped in), and there will be no more than two live music events before 7pm each month. This could be a big one, kids.

3. Over in Polk Gulch, McTeague's was approved at 1237 Polk, between Bush and Sutter. It looks to be a standard bar that serves food, approximately 2000 square feet. As for the restaurant slant, here's what they approved: "The business will primarily be a bar that will also serve limited food items including sandwiches and soups."

4. Rounding out the festivities is the Noe Valley Vietnamese/Asian fusion restaurant slated for the corner of 25th and Church (also home to vintage signage). We touched on the issues surrounding the restaurant earlier, and yesterday, as anticipated, it was approved with conditions.