Big and small, all openings around town are served up via The Dish. Notice a new debut in your neighborhood recently? The tip line awaits your sightings. 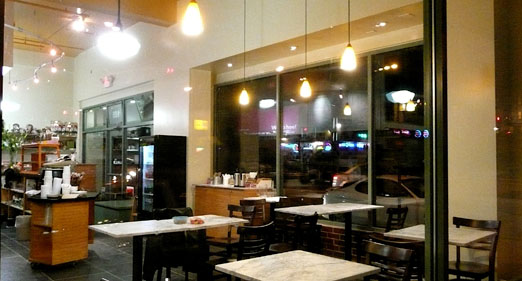 1) Upper Valencia: A block down from Market on the corner of Valencia and McCoppin, the finishing touches were put on Jackie's Vinoteca and Cafe, and as scheduled, they opened the doors over the weekend. While we're not quite sure what qualifies it as a vinoteca (it's such a pretty word though), Jackie's is open from 7am to 8pm daily and has the standard breakfast items, soups, sandwiches, salads and the like. No liquor license yet; perhaps when it comes through, the vinoteca side of things will come to fruition. 105 Valencia Street, at McCoppin Street; (415) 864-5225 [Eater Staff]

2) The Castro: Almost exactly a month after Ararat shuttered, Poesia has already reopened next to the new Brandy Ho's on 18th Street (slightly off topic: we got reports of 1.5-hour Saturday night waits at Brandy Ho's; can anyone confirm this?). The white-tablecloth Italian osteria held soft openings over the weekend—with the Yelp five-star reviews to prove it—and will officially open tonight. As those familiar with the late Ararat will recall, the space is a unique one, in that it is upstairs, removed from the street. Other notables: 49 seats, some at the bar, plus a poetry lounge. White tablecloths and poetry lounges: gotta love SF. 4072 18th Street, between Castro and Hartford; (415) 252-9325 [Eater Staff]

3) Financial District: Another quick turnaround went down on the corner of Kearny and Pine, where Pasilla Grill has opened in the former 360 Gourmet Burritos space, though for all intents and purposes, early reports have the song remaining similar: burritos, tacos, quesadillas and lunch bowls. Open until 6pm on weekdays; those feeling particularly adventurous can research the wonders of the pasilla. 359 Kearny Street, at Pine; (415) 989-8077 [Eater Staff]