All news fit to publish goes in EaterWire. Your sightings welcomed in this here tip jar. 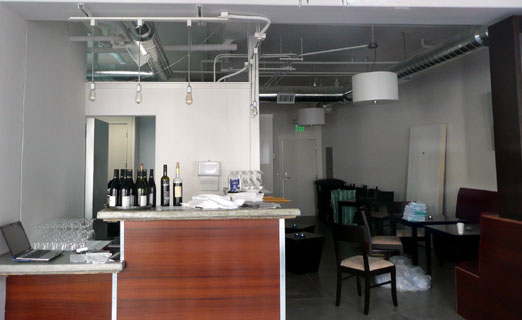 NOPA—Last night, the lights were on and plywood down at Candybar, as the dessert lounge held a special friends and family event. Despite the soft opening yesterday and several new mentions of its "open" status across the internets, Candybar is not—repeat: not—open tonight and won't be until this Saturday; however, starting today, reservations are being currently being accepted for Saturday night and onward. Thus concludes this Eater PSA. [EaterWire]

EMBARCADERO CENTER—In light of the exits from Sens reported earlier today, the official statement from Michael Dotson and Moira Beveridge reads thusly: "The ownership's vision for Sens Restaurant was no longer compatible with that of executive chef, Michael Dotson, and event manager, Moira Beveridge. The parties decided to go their separate ways, and the split was amicable. Dotson and Beveridge are currently looking for a space to open a restaurant on the Peninsula." [EaterWire Inbox, previously]

FERRY BUILDING—Long the subject of criticism regarding their curious waste (non-)policy, CUESA and the Ferry Plaza Farmers Market have launched a waste reduction program: "The Ferry Plaza Farmers Market will turn a brighter shade of green this Earth Day with a comprehensive waste reduction program and education campaign, featuring custom-made Waste Wise stations, informational displays, and a goal to phase out the use of plastic bags in the farmers' market in 2009. At the markets on Tuesday, April 22, and Saturday, April 26, the nonprofit Center for Urban Education about Sustainable Agriculture (CUESA), which operates the farmers' market, will roll out new Waste Wise stations made of side-by-side collection bins for compost, recycling, and trash." Not to (ahem) bag on the initiative, because it is a good one, but we, for one, find it fascinating that plastic bags are banned in supermarkets, but the farmers—god love 'em—can't get rid of them until 2009. [EaterWire Inbox]