Share All sharing options for: EaterWire: Delays at Fishbowl & Beretta, Plus Brunch News

TENDERLOIN—Over on the "wrong" side of the Hilton, the Fishbowl—Fish & Farm's adjacent seafood bar—has hit some delays and won't be open as soon as previously expected. According to our source, Team F&F is still working on various aspects of the contracting angles, and they are still awaiting the finishing touches (carpeting, etc.) The current opening date: "soon." Stay tuned, won't you? [EaterWire Inbox, previously]

THE MISSION—Proving once again that predicting restaurant opening dates is like hitting a moving target, delays are afoot in on Valencia and 23rd too, as Beretta has pushed back its grand opening to next week. The move is reportedly self-imposed (read: not permit related), so further delays aren't expected. The new date for the revamped Last Supper Club is next Tuesday, April 1st. More on Beretta here. [EaterWire] 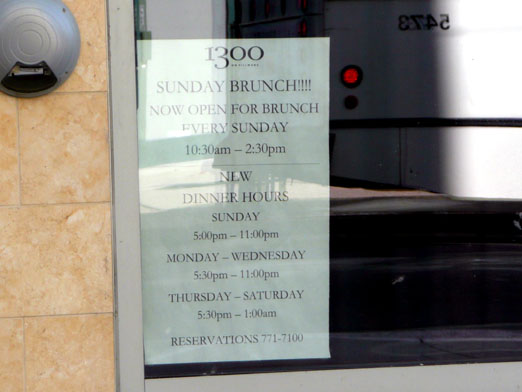 THE WORLD OF BRUNCH—A pair of big name restaurant kicked off brunch service over the Easter weekend. Not only did upscale soul food hotshot 1300 on Fillmore start a brunch service worth five exclamation points (see above!!!!!), but none other than Thomas Keller has decided to hop on the brunch train too, at Ad Hoc. From Bunrab: "Brunch at Ad Hoc is an excellent deal at $38.00 per person (ten bucks less than dinner, which includes a cheese course.) It would be a mistake to come here expecting a French Laundry type experience - it's casual, family style eating. Your coffee cup will probably not have the handle pointed at 4 o'clock, there are no tablecloths and the friendly servers are not moving with TFL precision and polish (especially on a Sunday morning after a Saturday night, this is a young group)." [EaterWire, Daily Feed]