And now, some big pieces of news, still white-hot coming off the EaterWire: 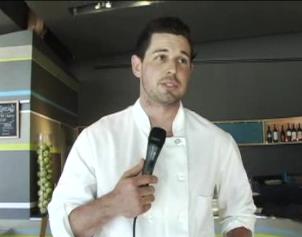 Item #1) Future Top Chef contestant and noted sexy food connoisseur Ryan Scott is leaving Myth Cafe. His last day will be next Friday, March 14th. No solid explanation is being offered by Scott or his spokespeople as to the reason for his departure, aside from the looming temporary closure of Myth Cafe and Myth, which brings us to...

Item #2) Possibly the bigger news: according to Scott and co., both Myth Cafe and Myth will temporarily close on March 14th and 15th, respectively. The wrinkle here is that this intel comes from Team Ryan Scott, not Team Myth. Sources at the restaurants are staying mum on the whole matter, insisting that nothing is certain yet, which means that a) Scott's exit has nothing to do with any Myth Cafe closure, or more likely, b) the long-rumored Myth overhaul is finally here. Story very much developing...

Item #3) Now that he will be moving on from Myth Cafe, Ryan Scott will be busying himself with a new business: his own business, called Ryan Scott 2Go! Brace, San Francisco. No further details are available on the enterprise, though you can probably make some inferences based on the name alone (surely, an escort service). Also, he'll be on that Top Chef show.
· Top Chef and Sexy Chef: Introducing Ryan Scott [~ESF~]
· Top Chef Rumors [~ESF~]
· Four Locals Make the Cast of Top Chef: Chicago [~ESF~]