Share All sharing options for: The Yoshi's Effect: Spices Meets the Shutter

All closings around town are reported by The Shutter. Notice a restaurant or bar that has recently passed along, most likely because of that nefarious health care law? Your tips very much appreciated. 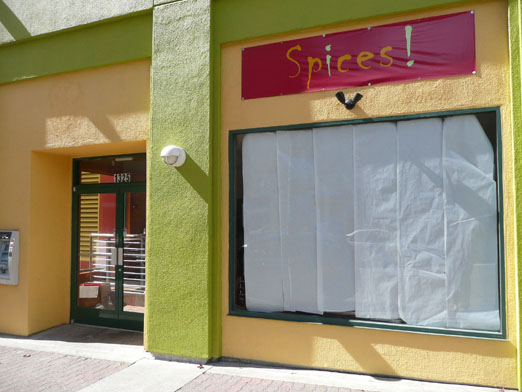 Back in November, all the rage in town was how Yoshi's, 1300 and the rest of the $65-million Fillmore Heritage project would reinvigorate the Fillmore, a dying 'hood if ever there was one. While both Yoshi's and 1300 have, for the most part, been critical successes thus far, the same can't be said about the surrounding blocks, and thus is the Yoshi's Effect born. In a one-block radius, Powell's Place faded away, Sheba's Piano Lounge might be on its last legs, and now the most recent casualty comes from directly across the street at Spices, the otherwise popular local mini-chain that just couldn't pull the crowds either. For those keeping score at home, Pac Heights and the Fillmore strip north of Geary have indeed been the big beneficiaries of the Yoshi's Effect, with a thriving scene and a plethora of big names en route (Delfina, Dosa, Out the Door, etc). On the southside of Geary though, an inordinate number of chains and empty storefronts dominate the blocks. But there is a frozen yogurt shop.
· Uh-Oh Alert: Sheba Lounge Feeling the Yoshi's Effect? [~ESF~]
· Yoshi's Might Inspire Pac Heights, Not The Fillmore [~ESF~]
· Club aims to return San Francisco to jazz glory [Reuters]