1) Since not all restaurants have the luxury of a PR machine that keeps everyone updated on the always changing arrival dates, some restaurants—believe it or not—still do it the old-fashioned, neighborhood-friendly way: storefront notes. Up first, on the corner of Fillmore and Clay, Long Bar and Bistro has officially announced its presence to Pacific Heights. We took a gander at Long Bar's long bar earlier in the month, and now it appears they are aiming for an April debut. Given the state of the interior, it seems possible, but we'll take the conservative bet. Eater projection: April 28. 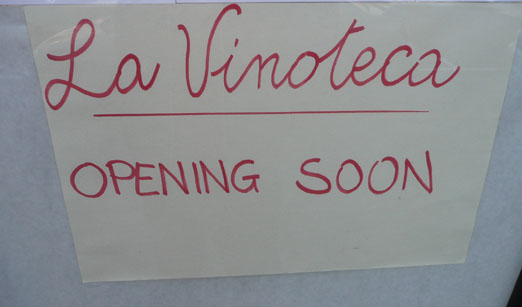 2) From a tipster comes the above shot of a brand new message adorning the Cow Hollow storefront at La Vinoteca, which appears to be the Luisa Hanson project closest to an opening. Extra color: "The entire storefront was recently covered up in paper so I'm thinking it's getting close. A new menu is up on the wall, plus this sign. The Luisa footsteps are growing louder!" Projection for this one is tricky, since after all, it's Luisa, and it's still unclear whether or not the sale has even been finalized. Last we checked in on matters, the space looked nearly ready to go, but we've got a feeling that red tape could delay things into late spring. From liquor licenses to escrow, there could be a rash of delays here. That said, we'll roll the dice: Eater projection: March 14.