All the latest and greatest openings around town are served up via The Dish. Notice a new debut in your neighborhood recently? The tip line awaits your sightings. 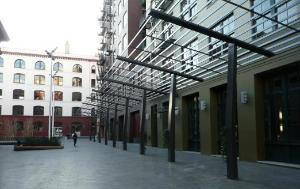 1) SoMa: Barring a tornado in Mint Plaza, the wait for a restaurant on Jessie Street finally ends tonight with the official opening of Chez Papa. By now, the tale of the oft-delayed Chez Papa is old news, so we'll focus on the "now." Taking the Mint Plaza restaurant space closest to Fifth Street, Jocelyn Bulow's second Chez Papa—the other is in Potrero Hill—will focus on the cuisine of Provence (menu here). Tonight is the dinner debut, with lunch service starting next week, and brunch on the horizon. Also, FYI: plenty of reservations are still available for tonight. 414 Jessie Street, between Fifth and Sixth, Mission and Market, (415) 546-4134; website [Eater Staff]

2) The Mission: It doesn't open to the public until tomorrow night, but Beretta—the artist formerly known as the Last Supper Club—will host a private opening tonight. As we see it, the Beretta folks have two big things going for themselves, both of which they are well aware. First, they'll offer late night dining in a town bare in late night dining options; second, the all-star team behind the bar (boasting names like Bourbon & Branch, Slanted Door, Range et al.) has already created a huge amount of anticipation on the cocktail circuit and rest assured that the Mission has plenty of drinkers. Thrillist has the menus for both the grub and drinks, should you be so inclined. 1199 Valencia Street, between 22nd & 23rd, (415) 695-1199; website [Eater Staff]