The Dish: Burger Joint IV and Macao (and Its Friends Too)

Share All sharing options for: The Dish: Burger Joint IV and Macao (and Its Friends Too)

Given the likes of Orson, Luce and Le Club all debuting in a five day period, last week was a doozie for The Dish, your source for all the town's latest and greatest openings. But have no fear, spring opening season continues. Spot a newbie? The Dish Hotline awaits. 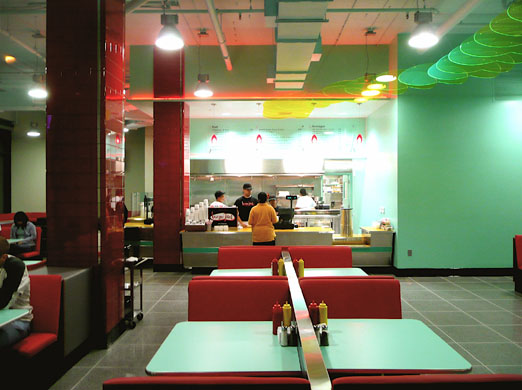 1) China Basin: The fourth location of Burger Joint opened last night on King Street. Aside from the diner-esque decor (for which you may want to bring sunglasses), it's pretty much the same deal as the other outposts, though it might be the biggest of the four in terms of size. The location, simultaneously a block from both the Caltrains station and the ballpark, should also bode well for the mini-chain. Bigger picture-wise, it could make or break that developing commercial strip. Pop quiz: without cheating, can you place the other three Burger Joint locations? 242 King Street, between Third and Fourth Streets; (415) 371-1600 website [Eater Staff]

2) The Sunset: A quick turnaround went down at 2240 Irving, where Macao Friends Restaurant has already reopened in the former So space. The cuisine, as should be obvious from the name, hails from Macau, which is a territory south of Hong Kong once claimed by both China and Portugal. Thus, Macanese cuisine is a mix of Cantonese and Portuguese (further reading on the wonders of Macau, including its thriving casino industry, can be had at Wikipedia). Getting back to the matter at hand, please be advised that Macao Friends is cash only for now and closed on Tuesdays. 2240 Irving Street, between 23rd and 24th Avenues; (415) 665-7888 [Eater Staff]