Share All sharing options for: Shutterwood: Caffe Espresso Makes Way for the Empire

That rare sliver in time that sees news of a shuttering coincide with the news of the next inhabitants? That's something we like to call Shutterwood. This is one of those times. 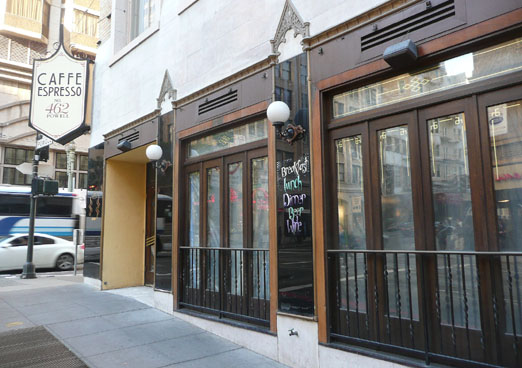 From a concerned reader comes the following tale of Caffe Espresso, the corner coffeehouse sitting in the ground floor of the Sir Francis Drake:

Caffe Espresso (don't know if thats the complete official name) has been on the corner of Sutter and Powell streets for as long as I can remember. Before I moved to San Francisco five years ago, I visited often for many years and always picked up lattes there, as I often stayed at the Marines Memorial hotel down the street.

I picked up a coffee one Monday morning on my way to work and, just two days later, I passed by the space and it had been completely gutted. Absolutely empty and under construction with a note stating "Thanks for your patronage over the years... Another restaurant will soon be occupying this space... yada yada yada." I know Kimpton owns the space, but the cafe was extremely busy every minute of every day -- what could possibly be replacing it that would be better than a decent coffee outpost downtown??

So what's going to go in the space on the corner of Sutter and Powell? Starbucks obviously, due in six to eight weeks. Yes, it seems too scripted to be true. Yes, there's one a block away. And yes, the change is indicative of a growing corporate culture, blah blah blah. But do remember that this is prime foot-traffic real estate, particularly for tourists and in-transit hotel guests (read: people who want Starbucks coffee to go, not a place to linger). Sure, the changeover is sad, but it makes sense and is not nearly as dastardly as say, a Starbucks in the Richmond.

As always, your sightings of closings and the like are very much welcome.