EaterWire: Scott Howard on the Market, Koi Gets Robbed

Share All sharing options for: EaterWire: Scott Howard on the Market, Koi Gets Robbed

All news fit to run goes in EaterWire. Your sightings and gossip to the tipline, please. 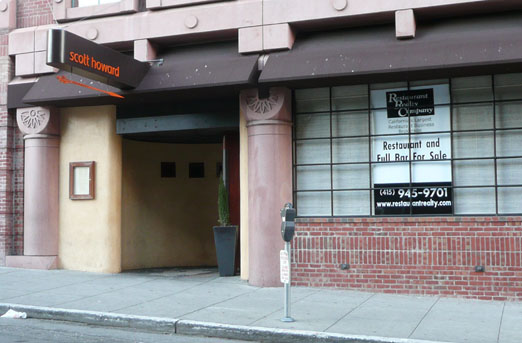 JACKSON SQUARE—Now shuttered for good, Scott Howard has officially gone on the market, as evidenced by the new window decorations seen above and this online ad. Among the selling points: "Millions of dollars have been spent on building this award winning restaurant and bar that was formerly the famous Cypress Club for many years ... The restaurant did $2.1 million sales in 2006 and $2.6 million sales in 2007." Current asking price for the difficult space: $595,000. [EaterWire]

DALY CITY—Arguably one of the best dim sum places in the Bay Area, Koi Palace got robbed of over $36,000 in cash over the weekend. From the Examiner: "When the restaurant’s employees came to work in the morning, they found that a cabinet containing a cash box was pried open and $36,288 in tips was missing, police said." We're not quite sure why anyone, let alone a dim sum restaurant, would keep that amount of cash laying around in a box, but know this: you'd have to sell an awful lot of $2 sesame seed balls to get that much dough. Fact. [SFE]

MINT PLAZA—Another obstacle has been overcome in Chez Papa's quest to open before the Chinese Olympics: the liquor license application has been approved and has crossed the threshold from pending to active. Baby steps, baby steps. Due date still tentatively set for the 18th, for now. [ABC]