Semi-Rumormongering: What Exactly Happened to the Front Room?

Share All sharing options for: Semi-Rumormongering: What Exactly Happened to the Front Room?

The sign inside the lobby of the now-shuttered Front Room. 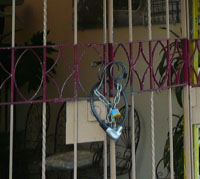 Earlier in the week, Lady Hopstress brought to light the sudden, rather mysterious shuttering of the Front Room. As was pointed out on Tuesday, the phone has been dead for some time; furthermore, on-site inspections reveal the front gates have padlocks on them (pictured, right). At this point, it's still very unclear what exactly happened at the Front Room—or if this is even a permanent shuttering—but at this point, the buzz around California Street lends two very divergent theories/rumors as to the nature of the Front Room's closure.

Rumor #1 has it that they sustained significant water damage during the mid-February showers. This line of thinking is enforced by the above signage gracing the lobby, though it doesn't quite explain a) why delivery/take-out has ceased as well and b) why the phone is suddenly dead. Rumor #2, however, is much more sensationalist:

The second, much more outrageous theory floating around the neighborhood is that federal agents—or some people flashing fancy badges—raided the Front Room. The nature of the raid is hazy at best, but following it, the Front Room was allegedly shut down. Again, nothing has been confirmed here, so do take it with a grain of salt, but for what it's worth, our sources swear that official-looking agents stormed the gates and soon thereafter, the place was locked up. Whether said raid is related to the shuttering of the Front Room, no one could say. Sensationalist story or not, it would explain the sudden closure, disconnected phone and padlocks, no?

Who knows, at this rate, maybe the (still-MIA) owners of the Front Room will show up and reopen shop after a nice vacation.

Anyone with any further information regarding the Front Room is very much encouraged to share, either in the comments or straight to the shutter hotline.