Share All sharing options for: EaterWire: Cortez Sold, Pescheria to Close This Weekend

All news and notes go in EaterWire. Sitting on some juice? The tip line awaits. 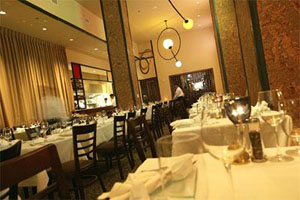 NOB HILL—Still the proud owner of a newly-minted Michelin star, Cortez has been sold to Ron Silberstein, the owner of Thirsty Bear and Ramblas, but don't expect changes: "[He] says Cortez will remain the same, chef and all. 'I love what (executive chef) Seth Bowden is doing over there,' he says. 'That's one of the reasons why I bought it. He's so focused on local and organic. I want to support him and am not going to change the concept.' Silberstein says he would like to add some of Thirsty Bear's handcrafted, organic ales and lagers to the menu, however." [Inside Scoop]

NOE VALLEY—But Cortez isn't the only big-name show in town changing hands, as Pescheria has announced that it will quickly shutter this weekend. From Lady Hopstress: "I've been hearing rumblings that Joseph Manzare's and Eddie Maiello's Pescheria was closing, and it looks like it's actually happening this weekend, on Saturday, April 5th (the building was sold). Instead, the restaurant concept will be moving into a much more central location: the big building that is being constructed over the old Bahia Cabana lot, at 1600 Market Street, near Zuni...Should be a ways out, I've heard a couple years." [TH]

NORTH BEACH—'Twas at last year's North Beach Festival that a nouveau frozen yogurt called Honeydoo passed out samples to spread the word about its summer '07 opening. Well, that hasn't quite worked out as planned, but the good news is that this year's NoBe Festival is right around the corner, and the controversies are starting already (hooray!): "At this year's North Beach Festival, the nabes wants to make the park a sobriety zone ... Brace for this year's plan, up for review this week: It calls for vendors to stop selling beer in the park, which will instead become an 'all ages beer garden.'" [Curbed SF]

SOMA—That neighbor in SoMa that is protesting a gay bar? It's getting worse. Much worse. Here's the latest from the Hole in the Wall owners: "Presently, a woman nearby on Dore Alley, still refusing to meet with us after all this time, has sworn to stop our pub from ever opening, actually terming gays in the neighborhood 'sexual outlaws' who would 'invade my neighborhood.'" Goodness, what year are we in again? [SFist]