This year, they're letting third-graders write the polls. Or Padma.

Roughly 24 hours ago, after seeing the juicy preview clip from Bravo, we had a quick discussion with Eater LA about the upcoming fifth episode, each California contingent fretting that local chefs—SF's Zoi and LA's Antonia—looked like they were on the chopping block (yet again). Plus, there were teasers of some serious drama in the stewing room. As it turned out, Zoi and Antonia were indeed among the losers, and the last two minutes of the episode somehow turned into a parody of the Real World. Up ahead: a quick episode summary, followed by our local recap.

Summary: Celebrity chef Ming Tsai, looking like he rolled out of the Marina (yin/yang choker and everything!), hosted the Quickfire, the classic palate test. After bragging about her palate and taking note from previous seasons, Antonia ended up winning immunity, which would come in huge later. For the Elimination Challenge, the cheftestants split in teams of three to make first courses for a catered meal at the “Meals on Wheels” ball. Dishes were inspired by the elements, and Lisa, of Team Fire, was awarded the win (and a trip to Italy) for making miso-crusted bacon. Then, as promised, Spike, Jennifer, Antonia, Dale, and Lisa went bonkers on each other at the end, in possibly the most enjoyable yet strangest two minutes of the whole ep. Thing is, we're still not completely sure what they were all bickering about. And why did Dale grab his crotch?

1) Zoi: Once again, Bravo kicked off the episode by highlighting the lesbian relationship. And once again, the forced story arc went nowhere, until the final few minutes. But we're getting ahead of ourselves. After going unnoticed in the Quickfire, Zoi found herself on Team Earth with Antonia and Spike. Following Antonia's lead, they make a carpaccio with mushrooms. Zoi underseasoned the mushrooms and the entire dish tasted like nothing, so with ringleader Antonia having immunity, Zoi took the fall. Our trio's down to two.

2) Jennifer: In the Quickfire, JB tied for second (with Ryan), finishing only one point behind Antonia. For the big challenge, she was on Team Air, where she, Ryan and Nikki combined forces to make a middle-of-the-road duck breast with a pomegranate cocktail. Later, she was pretty surprised that Zoi was sent packing, but takes it as it comes. Thanks to some odd editing, we don't really know why she kicked over a chair during the post-judgment melee. Anyone?

3) Ryan: Like Jennifer, he finished second in the Quickfire and went largely unnoticed in the Elimination. Has anyone noticed how Ryan—be it his choice or others'—makes a salad every week? He's a salad master. A quiet episode for Mr. Scott.

4) Forecasting: Well, five episode down and already two San Franciscans out. The good news is that, based on editing (and resumes), Jennifer and Ryan are the two strongest SF chefs and it was expected they last longer than Zoi and Erik. Jennifer still hasn't been on the chopping block, and Ryan hasn't been under fire since the first episode. Of course, neither has been winning either. Both are middle of the pack, right now. Predictions sure to go wrong: Jen is a sleeper contender for the final few and Ryan is interesting/pretty/talented enough to stick around well into the second half. Godspeed, San Francisco Duo.

5) Bonus Look Alike Fun: Switch up the hair a little, and Richard looks exactly like Martin from The Simpsons: 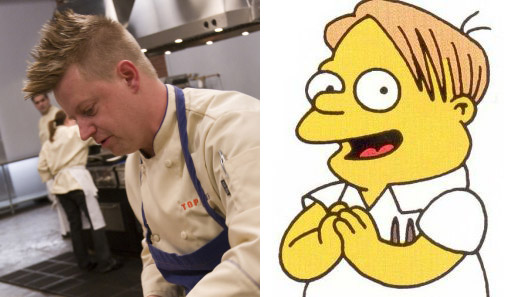