Share All sharing options for: EaterWire: Pasha Overhauls, Luisa Claims (Yet) Another

All the day's news and notes go in EaterWire. Your tips appreciated at sf@eater.com. 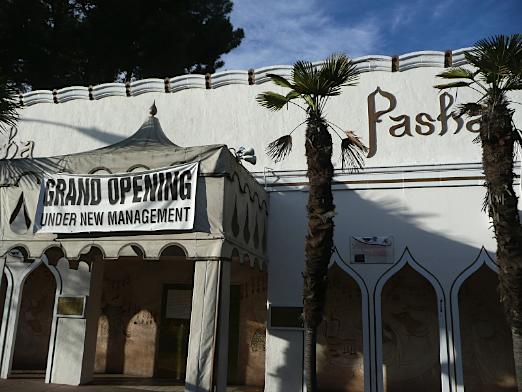 POLK GULCH—Shuttered since that fatal December fire next door, the new owners at Pasha have, obviously, taken the opportunity to go beyond "smoke damage repairs." Hoping to reopen in about a month, they are redoing everything, from the interior to the menu, which will abandon the traditional Moroccan menu for a fusion version. And you thought fusion was dead. [EaterWire]

THE MARINA—Somehow, the iron curtain of Luisa Hanson's Empire continues to drape itself over our fair city, with another hometown fave now under the guillotine, albeit way down the line. Lady Tablehopper has the scoopage: "The latest I've heard is she is taking over the building where Cafe Maritime is located, so owner Mark Mitcheltree will be out. Thankfully it's still a ways off (like two and half years) ... Mitcheltree will eventually look for another place to locate the business (at least he has some time), but man, he's put a lot of work into building his business on that stretch of Lombard." We can't believe this story continues to be told. [Hopstress]

FOOD AISLE—And now, to lighten things up: Heinz thought it a good idea to make a fancy ketchup: "The new gourmet ketchup, which is described by Heinz PR as 'the ideal condiment for families who want a more sophisticated table sauce to match their palate," will be made from '12 plump tomatoes, spices, sea salt, Demerara sugar, cayenne pepper and lemon juice.' It also sells for triple the price of regular 'everyman' ketchup, and will be out in two weeks." [Epi Log]

UNION SQUARE—Directly from the Top Chef brass at Bravo: "We are coming to San Francisco on Monday, April 21st to hold an open casting call at Postrio from 10:00am - 2:00pm. We want dynamic chefs from all backgrounds to come by and meet with us. We're looking for chefs with a passion for food, creativity, a knowledge of cooking techniques and trends, and oodles of charisma. We're excited to meet everyone. All interested candidates should come to the open call whether or not they have started their application package." [EaterWire Inbox]

MORE REALITYVILLE—Cutty shares that the next famous chef/restaurateur to get a reality show is none other than Donatella Arpaia: "According to a press release, Donatella 'follows her as she deals with the constant challenges of staying on top in the cutthroat culinary world, keeps her demanding clientele happy and manages her diverse and eccentric staffers — while she triples her New York-based dining empire in a six month period.'" [Cutlets]