The glad tidings of The Dish are counterbalanced by sad reports of closings of The Shutter. Notice a recent closure in your area? Do let us know. 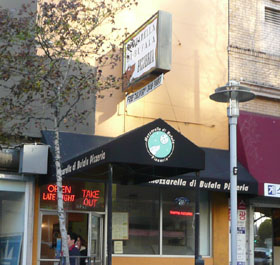 Now, to be sure, there is zero direct evidence that Yoshi's and 1300 are having any negative effect on surrounding restaurants. In fact, intuition would suggest the opposite. Still, since the hyped arrival of the mega-projects in November, a pair of neighbors have shuttered, and now, 20-year-old Brazilian/pizza joint Mozzarella di Bufala makes the victims of the curse a solid trio. From the Shutter Inbox:

Got a postcard today from Mozzarella di Bufala:

The Fillmore Street location of Mozzarella di Bufala will be permanently closed for business beginning April 21st. We'd like to thank you and your family for making Mozzarella your pizza choice for over 20 years."

Nervous glances have officially been cast towards the surviving independents on the block, including Sheba Lounge and Happy Shabu Shabu. Is natural selection at work in the Fillmore? Might better restaurants replace the departed? Is the curse real?
· The Yoshi's Effect: Spices Meets the Shutter [~ESF~]
· Uh-Oh Alert: Sheba Lounge Feeling the Yoshi's Effect? [~ESF~]
· Yoshi's Might Inspire Pac Heights, Not The Fillmore [~ESF~]