Got some news for EaterWire? The tip jar awaits. 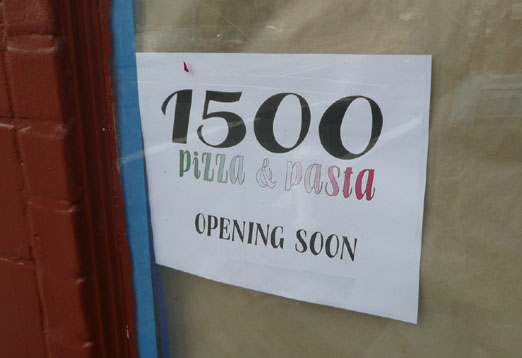 NOB HILL—A tipster put forth the rumor earlier today, and now we've received confirmation from the restaurant: the official name of Luisa Hanson's upcoming pizzeria in the former Front Room space at 1500 California has changed from Pompei to 1500. We're not quite sure what to think of the name change—except that it probably won't be 200 better than 1300—but we do know one thing: this switch certainly won't get it off the Deathwatch. We couldn't get an opening date out of them though, so the date remains "soon." [EaterWire]

LAFAYETTE—It didn't make the first cut of the Scoop, but late edition had the news that Daniel Holzman has landed himself a new gig across the Bay: "In the East Bay, Daniel Holzman, who was the opening chef at SPQR in San Francisco will become chef at Chow in Lafayette (53 Lafayette Circle). It will be a major change for Holzman, from the compact, Italian SPQR, to the sprawling space and all-American menu of Chow." From 3.5 stars in Pac Heights to Chow in Lafayette? Major change might be an understatement. [Scoop]

SAN MATEO—Glen "Gator" Thompson's restaurant Gator's Neo-Soul Café is still less than a year old, but the wildly-successful joint is already expanding next door to include a stage and piano. The new space is scheduled to arrive on June 1, but the bigger news is Thompson's next plan: "His current landlord recently purchased the former Oddfellows building just north of Gator's Neo-Soul Café so Thompson can open a world-class jazz club on the 5,000-square-foot second floor by 2010. The building's second floor is in its original condition with classic wood decor. Add some red velvet and leather, 450 seats, a big stage and a deal with a big name East Coast promotions company and San Mateo is looking at its version of Redwood City's Little Fox Theatre. Thompson imagines it like San Francisco's Yoshi's, attracting big names through a promotional deal with East Coast-based Blue Note." [SMDJ]