It's time for another edition of The Dish, your source for all the latest and greatest openings. See something debut in your neighborhood? The tipline awaits. 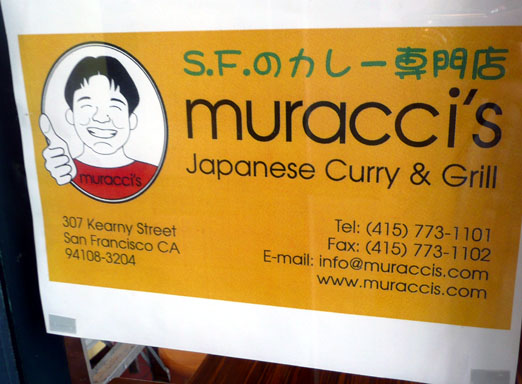 1) FiDi: The space that once housed Kearny Street Pies has reopened as Muracci's, a Japanese curry & grill restaurant with some snazzy disjoined-thumbs-up cartoon graphics. The menu is pretty straightforward, offering several teriyakis, katsus and eight curry dishes advertised to have simmered for two days. Noodles, donburi and various other Japanese staples are on the menu too; nothing is over $10. Closed Sundays and evenings. 307 Kearny Street, between Bush & Pine; (415) 773-1101; website [Eater Staff]

2) SoMa: Now boasting a renovated interior, Club 330 Ritch reopened over the weekend after a two-month closure. SF Weekly was there to share some shots of the Ritch Redux, in slideshow form. Once the venue gets rolling, there will be a full menu of tapas and other select bar bites. 330 Ritch Street, at Brannan Street; (415) 541-9574; website [SFW]

3) SoMa: Another nightlife opening from the south of Market neighborhood comes via the Sunday Chron, complete with some predictions: "On Friday, David Morgan threw open the doors to Chaps II, the most recent indication that leather is making a comeback in SoMa ... Chaps II, at 1225 Folsom St., is named for Chaps, a bar that operated from 1983-85 on 11th Street, where the DNA Lounge is now located ... Things will never return to the "glory days," said Mike McNamee, 69, the owner of Stomper's Boots on 10th Street. But if Friday was any indication, a new era may be dawning. 'I hope it all clicks,' he said. 'I think there's an appetite that's not being served.'" 1225 Folsom Street, between 8th & 9th; website [Chron]