Have a delectable nugget for EaterWire? To the tipline you go. 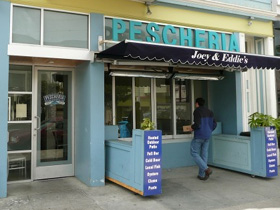 NOE VALLEY—Since Pescheria shuttered the first week of April and word came out that Henry's Hunan was en route, things have been very quiet at 1708 Church Street. Even though the old signage remains—not to mention the entire, untouched interior—the fourth Henry's Hunan is still coming: "Henry's Hunan, which has four other locations in San Francisco (Chinatown, Financial District, and two in SOMA), has agreed to buy out the lease, together with the fixtures and equipment. The restaurant will reopen the doors at 1708 Church after it obtains licenses to remodel the interior. 'We're hoping to open in July or August,' says Henry's general manager, Eddy Zhu, 'after we get all our permits with the city and make some changes in the kitchen, to change stoves and install woks.'" [Noe Valley Voice]

NOB HILL—UrbanDaddy has it that for the first time in its 16-year history, The Big Four Restaurant's annual Wild Game Week will make an appearance in springtime. From May 20th-24th, Executive Chef Gloria Ciccarone-Nehls, in her 29th year at Big Four, will trot out a special menu full of whatever game meats—rattlesnake, yak, Pier 27 baby whale, the works—she can find. [UrbanDaddy]

SOMA—Though it's unclear exactly how the list was determined, since it's yet to be formally reviewed, Luce has been chosen one of the four best new hotel restaurants in the world, alongside heavyweights like London's Alain Ducasse and NYC's (and Robert DeNiro's) Ago: "[Dominique] Crenn delivers a seasonal California-Italian menu with organic seasonal influences delivered in a meticulously thought-out menu. A mix of land and sea, dishes like Black Ink Trofiette Carbonara (squid in black ink with a poached egg), seafood tartare and an aged ribeye topped with braised oxtail are impeccably presented with a wine list created by Michael Mondavi (Robert Mondavi's son)." [MainStreet]