EaterWire: Comeback For U Street? Plus a Ghirardelli Tea Salon, Another Immigration Raid and More!

Share All sharing options for: EaterWire: Comeback For U Street? Plus a Ghirardelli Tea Salon, Another Immigration Raid and More!

Got a delectable tidbit for EaterWire? Send it along to the tipline, would you? 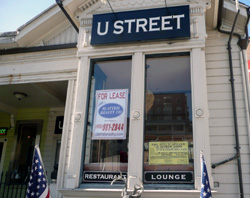 COW HOLLOW—According to a photo newly arrived in the EaterWire Inbox, there's new liquor license activity afoot at 1980 Union Street, better know as the former U Street Lounge above Bar None. The curious part of the photo, though, is that the For Lease signs are still up as well, which combined with the lack of a DBA, makes us wonder if there's a new owner looking for a new tenant as well. Whatever the case may be, something is underway. Anyone with intel is kindly encouraged to share. [EaterWire]

GHIRARDELLI SQUARE—The tourist fave's attempt to transform into a boutique local destination is nothing new. Fancy cupcakes and wine shops have already arrived, with a gourmet market and a Danko on the way. Now, the influx continues anew with the most recent tenant to sign on: Crown and Crumpets. It's a tea salon and slated to open this summer. Plywood to follow. [EaterWire]

CALIFORNIA—In the wake of last week's big El Balazo raids, another immigration raid has gone down, this time in the San Diego area: "Federal immigration officials detained about a dozen people Thursday at a French bakery and catering company on suspected immigration violation." Look out: the immigration police are cracking down. Yes, two is a trend. [AP]

UNION SQUARE—As you may know, Cocktail Week kicked off earlier this week at the Starlight Room, and even bartending legends showed up: "As a fitting gesture to launch the week, local bartenders honored Tony Abou-Ganim, the opening bar manager of the Starlight and one of the people who really got the SF cocktail scene rolling. Abou-Ganim is a Vegas bigshot with books and videos and consulting projects all over the country. But his spirit still infuses the mania for creative cocktailing in the SF bar world, which reveres him as a tribal elder." [Buzzed]