Got some juicy juice for EaterWire? Off to the tipline you go. 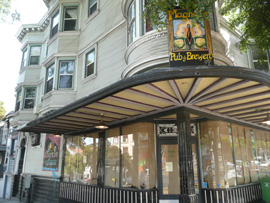 THE HAIGHT—When Magnolia reopens this week after his little hiatus, one of the more notable changes will be its new name: Magnolia Gastropub & Brewery. The "gastro" is meant to signify the newfound extra focus on food, and as mentioned earlier, the entire menu is getting overhauled by Brandon Jew, late of Pizzetta 211. As for the physical renovations of the space, there will be a new bar, new tabletops, new booths, and maybe the biggest news: the entire mural is doneski, replaced by a "gold leaf wall treatment." Stay tuned for the Wednesday return. [EaterWire]

PACIFIC HEIGHTS—Last seen in the Plywood Report in the beginning of the month, Long Bar & Bistro missed its anticipated April opening, but the old Fillmore Grill is getting close. According to a Craigslist ad, they are hiring front of house personnel, and an opening for the "classic American establishment" at Fillmore/Clay is nearing. [EaterWire]

LOS GATOS—Oh yes, there exists a restaurant "Fine Dining Hall of Fame" run (delegated?) by Nation's Restaurant News, and Manresa is among this year's proud inductees. We're not quite sure how the list is decided, but this might be the only time fellow honoree Harrah's Steak House in Reno is ever mentioned in the same sentence as David Kinch. [NRN]

FOOD NETWORK—Take a bow, Bourdain: the winner of the '08 Golden Clog for The Alton ("For being on Food Network and yet, somehow managing to not suck"), Ina Garten, will be getting a new show, even though all her friends might be florist. From Food Network Addict: "And in the best news ever, 'Ina Garten will help viewers throw cocktail parties, rather than just cook for her own friends and family, on Barefoot Contessa: Back to Basics.'" [FNA]