The Sentinel isn't the only new kid in town, which means it's time for The Dish, your source for all the latest and greatest openings around town. Spot something new in your neighborhood? Drop it in the tip jar, please. 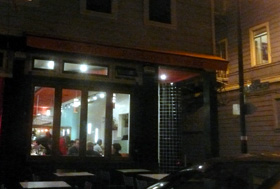 1) North Beach: Just here to the right, you'll see the scene at Vicoletto on this Sunday night past, sent in by a tipster, meaning that the quick turnaround is complete. As we've noted before, most of the design elements are holdovers from the short-lived Nua era, and as with most newcomers, the southern Italian menu is probably a work in progress, but UrbanDaddy has rabbit ravioli as an early option alongside a "small but thoughtful" wine list. Current hours are 5:30 to 10pm daily, with weekend lunch en route. 550 Green Street, at Jasper; (415) 433-5800 [EaterWire]

2) Inner Richmond: Speaking of speedy transformations, over on Geary, Sushi Rock is no more, and in its place enters Kansai Bistro, open as of last week. The new owners have kept the sushi theme, there are separate dining and lounge areas, the green tea chocolate cake has already gotten a rave, and the place is now open for lunch and dinner. 4112 Geary Boulevard, between 5th Ave and 6th Ave; (415) 386-6188 [EaterWire]

3) Outer Sunset: Our Shutterwood vet from last week, Amisha Indian and its non-subtle signage opened over the weekend as well. As is the custom of the neighborhood, it has erected a Grand Opening banner that will most likely last until the next Olympiad. 1924 Irving Street, between 20th Ave and 21st Ave; (415) 759-7007 [EaterWire]

4) Berkeley: After more than a few delays, the new location of Rocky's Burgers finally opened its doors. Like the original Oakland branch, it's pretty much your standard burger joint, though this offshoot apparently has an espresso bar and is open a bit later, from 10am to 8:30pm. 2929 Shattuck Avenue, at Ashby Ave, Berkeley; (510) 666-0246 [EaterWire]