All the day's news and notes go in EaterWire. Drop your tidbits in the tip jar, please. 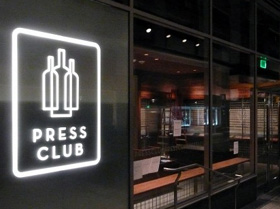 YERBA BUENA—The liquor license situation continue to cause problems for Press Club, and once again, the wine production has pushed back opening about a month, even though the interior is ready to roll. The new, tentative date is late June. At this rate, Amber India across the way just might sneak in and be the first restaurant to open down on Yerba Buena. [DelayWire]

NAPA—Come August, the old Pizza Azzurro space on Second Street will be occupied by Elements, and the Napa Valley Register pens a long article sharing everything you ever wanted to know about the upcoming small plates restaurant: "[Chef Charles] Weber says the menu will encompass the broad spectrum of Mediterranean cuisine ... he and his partners intend to focus on food and wine pairing, 'recommending a particular glass of wine that can go with a dish. But we intend to do that without pretense, because we want to encourage experimentation.'" [NVR]

RUSSIAN HILL—We're still not entirely sure as to the happenings on Van Ness with possible club, possible restaurant Heights—other than it was not yet open over the weekend—but here's a bit more murky intel: "In an email that went out yesterday from Urbanis, the Urban Informus, it was referred to as a chic new neighborhood lounge." [Eater Comments]

TOP CHEF UNIVERSE— Remember those suspicious frozen scallops that sent Spike home on last night's Top Chef? Turns out they were planted: "Just so everyone knows (I was part of the Top Chef taping that aired last night) the scallops in the challenge that sent Spike down the pike were a set-up placed by Top Chef's producers into the restaurant's coolers. That was not conveyed in the editing process." [Gawker via Eater]