Have a juicy nugget of intel for EaterWire? Drop it here, would you? 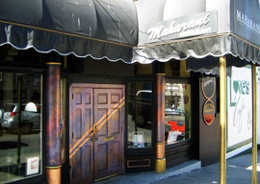 POLK GULCH—While decisions on most of the big restaurant-related items at yesterday's Planning Commission meeting were delayed for further discussion (including Golden Boy, Panta Rei and the Marina Subway), one item approved was Maharani's motion for a Type 75 license in addition to their current beer/wine license. This license would permit the sale of distilled spirits for on-site consumption, "plus the operation of a microbrewery." Huh. Probably just cocktails, but still. [EaterWire]

COLE VALLEY—If ever there was a mild-mannered, post-it-leaving neighborhood in the city, it's Cole Valley, which is why an armed robbery in broad daylight is so surprising: "Two employees were opening a coffee shop at Waller and Cole streets at 7:39 a.m. May 11. A suspect followed behind with a gun in hand. He pointed the weapon at both employees and told them to show him where the cash was stashed." Fortunately, no one was hurt and the bad guys were apprehended soon thereafter. We're thinking the place in question could be Cole Valley Cafe? [SFE]