All the day's notable notes and tidbits go in EaterWire. Got some juice? Your news and sightings always welcomed to the tipline. 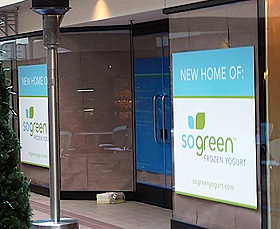 FINANCIAL DISTRICT—Down in Crocker Galleria, the oft-delayed SoGreen has set a date and according to the website, will be ready to bring the magic of froyo to the Upper FiDi on May 22nd. Even better: they will be giving out SoGreen "presents" to the first 1,000 customers. What these presents are, we can only imagine, but we have to wonder about the lofty number of 1,000. They must be expecting an awful big opening day crowd because if one cup is swirled per minute, they'd be out of presents in about 16 hours. Run, don't walk. [EaterWire]

SOMA/HOLLYWOOD—Eater LA has been all over AsiaSF's expansion down south from Day One, and now the gender bender restaurant/club is going global and might even get a reality show: "The new place is the second stop on what owners Larry Hashbarger and Skip Young describe as their 'global domination tour' ... Hashbarger and Young are also negotiating a reality television deal to bring AsiaSF Hollywood to the small screen. The show would be the first of its kind - a series documenting the lives of 22 male-to-female transgender people as they master complex choreography, learn to move like biologically born women and fight through often painful transitions." [Chron]

SOMA—If you've been craving Iranian-Guatemalan-Filipino food, you're in luck: "Chefs Mero Cocinero Karimi and Comrade Cocinero Castro dish up Iranian-Guatemalan-Filipino food, political discussion, cultural consciousness and humor in 'The Cooking Show,' which arrives in San Francisco this week fresh from off-Broadway and other major venues. The chefs create revolutionary recipes onstage, serving up stories and delicious culinary samples, guaranteeing a taste for every audience member. The Associated Press called the show 'a globally flavored recipe that packs some punch lines.'" Yes, this is from the Examiner, not a press release. [SFE]

CIVIC CENTER—We don't usually mention special promotions, but for cheap soul food brunch buffets—for charity—exceptions can be had. From SFCD: "... check out the Old Skool Cafe Gospel Brunch at Farmer Brown. This delicious, all-you-can-eat buffet is just $25. In addition to serving fine food, all the young employees in the kitchen and waitstaff will entertain you with gospel singing and dancing." [SF City Dish]